The Plastisphere: Ocean Pollution May Trigger Next Pandemic 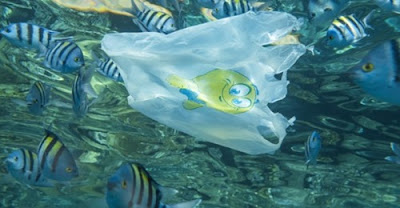 Plastic pollution has contaminated our oceans to the point where a new ecological niche of anthropic origin has been coined: the "plastisphere". The bacteria that proliferate there could lead to the next health crisis.
Yann Verdo
LES ECHOS
2021-03-01
English edition • WORLDCRUNCH
Study after study, and each more damning than the last.
A study from December 2019 in "Scientific Reports" described how a region of the world as remote as Easter Island (Rapa Nui) could have its coasts littered with plastic debris: marine currents connect it to an intensive fishing zone off the coast of Peru and the densely populated coastal areas of the South American continent.
A month earlier, scientists on the sailing vessel "Tara" returned from a six-month mission around the four European seafronts where they collected samples from Europe's nine main rivers (Thames, Elbe, Rhine, Seine, Ebre, Rhone, Tiber, Garonne, Loire) and revealed that all were polluted with microplastics, that is plastic debris smaller than 5 millimeters, usually coming from the fragmentation of macro-waste like plastic bags, bottles, fishing nets, synthetic fabrics, etc.
But the rivers that feed the oceans are not the only source of plastic pollution. Both on land and sea, plastic waste is now so widespread that some researchers have even proposed to label it as a characteristic of the "Anthropocene," the earth's current geological era whereby human activities make a significant impact on the Earth's ecosystem.
The plastic continent
During a meeting on "Polymers and Oceans", the French physico-chemist Pascale Fabre explained how the pervasive effect of plastic pollution can be understood by its low manufacturing costs and durability, thus the reason for its exponential growth in production and ability to survive for decades.
Every year, no less than 10 million tons of plastic waste are dumped into oceans, where currents lead them into the ocean gyres. A good/ terrifying example of this is the vortex of waste in the North Pacific, dubbed the "8th continent" and the "Great Pacific Garbage Patch," which was discovered in 2013, contains 80,000 tonnes of plastic and spans 1.6 million square kilometers, which makes it roughly an area three times the size of France, or twice the size of Texas. And, for as shocking as it might sound, this floating plastic continent is more like an iceberg, with most of the dense mass hidden deep below the surface area.
In the Mediterranean Sea alone — which already suffers from poor waste management - 200 tons of plastic are washed ashore each year.
"On the Mediterranean seabed, the density of plastic waste can reach up to 1 million pieces of debris per square kilometer," revealed François Galgani, oceanographer and ecotoxicologist at the Ifremer Centre in Corsica.
Sponges of pollution
Take a minute to think of all those distressing images of marine animals being strangled or injured by macroplastics. The problem posed by the microplastics — the ones that we can't exactly see — is even more serious.
Present in water everywhere, these microplastics are ingested by every organism in the food chain, from zooplankton to the largest of whales, reducing their ability to digest food and absorb nutrients, thus altering their intestinal microbiota (dysbiosis), slowing their metabolism. It's a cascade of detrimental effects made all the more significant by the proven chemical toxicity of these tiny plastic fragments.
When it comes to marine plastics, toxicity doubles, CNRS (The French National Centre for Scientific Research) ecotoxicologist Ika Paul-Pont explains.
"On one hand, it's because plastics are hydrophobic, so they act like "sponges of pollution" that absorb and concentrate contaminants present in seawater - hydrocarbons, pesticides, and metal. This debris is highly concentrated, with levels of toxicity up to a million times higher than in the surrounding water. Plus, plastic itself is toxic [95% polymer (polyethylene, polypropylene, polystyrene, etc.) with 5% additives (colorants, flame retardants, etc.), editor's note]. This 5% of additives is made with such a wide variety of chemicals that they are not identified, but undoubtedly they contain endocrine disruptors, such as phthalates and bisphenol-A."
However, the most worrying aspect of plastic pollution is the "plastisphere," which refers to all the micro and macro-organisms (bacteria, fungi, protozoa, algae, invertebrates, crustaceans) that colonize plastic waste and form what specialists are calling a "biofilm" around their surface. Known since 2013, it has developed into a serious topic of concern for the scientific community.
In 2016, two Dutch biologists discovered bacteria of the genus Vibrio, a family that includes the bacterium responsible for cholera in the plastisphere. Three years later, an alarming new discovery topped the previous one: while studying bacteria found on plastic waste off the coast of Antarctica, scientists found that these bacteria were as antibiotic-resistant as the toughest bacteria present in urban environments. Certainly, if these microplastics have the capacity to absorb surrounding contaminants, they can just as easily absorb antibiotics.
The big problem with the plastisphere is that the plastic debris that supports it is just the medium of choice.
"Plastics remain in the environment much longer than biodegradable materials such as driftwood, so they are able to migrate much further over much longer time periods," explains Paul-Pont.
In 2017, just six years after a tsunami ravaged the coasts of Japan and caused the accident in Fukushima, American scientists found 289 species of invertebrates on the west coast of the United States that had never been found there before and had originated in Japanese waters. These little creatures had crossed the Pacific on the plastic debris set in motion by the tsunami. The fear with such artificially transplanted foreign species from one ecosystem to another is that they tend to be invasive.
They also bring the possibility of dangerous pathogens, whether Vibrio bacteria or something new. Coupled with the threat of antibiotic resistance, it becomes obvious that we must urgently tackle this problem.
See more from World Affairs here
Publicada por João Soares à(s) 11:02