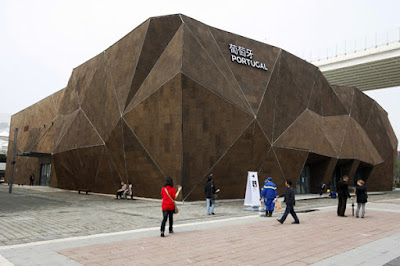 Ver e ler aqui a lista dos 10 locais mais poluídos do Mundo Relatório 2007 do Blacksmith Institute, publicado em Setembro desse ano, CHERNOBYL, UKRAINE
Russia, China, India top worst-polluted list
Four of the world’s 10 most polluted places are in Russia and two former Soviet republics, an independent environmental group said in a report released on Wednesday.
Encompassing seven countries, the top 10 sites may cause some 12 million people to suffer health problems ranging from asthma and other respiratory ailments to birth defects and premature death, the New York-based Blacksmith Institute said.
“These places are sapping the strength of the populations around them, and it’s not rocket science to fix them,” Richard Fuller, the nonprofit group’s founder and director told reporters on a conference call.
He said simple engineering projects could make many of the places safe, but that funds, political will, and technical ability were often lacking.
Concern about polluted places is growing as the world’s population swells and people in developing countries like China and India buy more cars and electronics -- habits that had been limited mainly to rich countries like the United States.
The polluted sites in Russia and the former Soviet republics include Dzerzhinsk, Russia, which until the end of the Cold War was one of the country’s major chemical weapons centers, and Chernobyl, Ukraine, where the world’s worst nuclear accident occurred in 1986, Blacksmith said its second annual report.
China and India each has two sites in the top 10. Linfen, China, is in Shanxi Province, the heart of country’s expanding coal industry, while Tianying is one of the country’s largest lead production bases. In Tianying, residents, particularly children, suffer lead poisoning symptoms such as learning disabilities, brain damage and kidney malfunction.
Remote Locations
In La Oroya, Peru, another top 10 site, heavy metal mining has left 99 percent of children with higher than acceptable levels of lead in their blood, the report said.
In Kabwe, Zambia, children who play in the soil near heavy metal mining operations and young men who scavenge the metal, have lead poisoning levels close to those regarded as potentially fatal, Blacksmith said.
The institute, which worked on the report with Green Cross Switzerland, did not rank the top sites because the quality of health information from each country varies.
The polluted sites are often in remote mountain areas, especially those linked to mining, which can complicate the gathering of health data, the report said.
Blacksmith has amassed data over the last seven years on 400 sites to come up with the list that can be seen at www.worstpolluted.com. This year, the institute also listed the “Dirty 30,” which includes the top 10 sites. In the expanded list, Russia and former Soviet republics have 10 sites, and China six.
No U.S. sites were in the group’s top 10 because pollution laws there have led to the cleanup of heavily polluted areas since the 1970s.
Consumers in rich countries could be indirectly responsible for some of the pollution, however. “Much of the nickel in U.S. cars and lead in car batteries may have come from these places,” Fuller said.
The annual list was compiled with help from specialists at Harvard University, Johns Hopkins University, Hunter College in New York, India’s ITT, the University of Idaho, Mt. Sinai Hospital in New York and others.
Publicada por João Soares à(s) 00:02 Sem comentários:

NEW YORK, New York, April 26, 2010 (ENS) - Nearly one million people around the world died from exposure to radiation released by the 1986 nuclear disaster at the Chernobyl reactor, finds a new book from the New York Academy of Sciences published today on the 24th anniversary of the meltdown at the Soviet facility.
The book, "Chernobyl: Consequences of the Catastrophe for People and the Environment," was compiled by authors Alexey Yablokov of the Center for Russian Environmental Policy in Moscow, and Vassily Nesterenko and Alexey Nesterenko of the Institute of Radiation Safety, in Minsk, Belarus.
The authors examined more than 5,000 published articles and studies, most written in Slavic languages and never before available in English.
The authors said, "For the past 23 years, it has been clear that there is a danger greater than nuclear weapons concealed within nuclear power. Emissions from this one reactor exceeded a hundred-fold the radioactive contamination of the bombs dropped on Hiroshima and Nagasaki."
"No citizen of any country can be assured that he or she can be protected from radioactive contamination. One nuclear reactor can pollute half the globe," they said. "Chernobyl fallout covers the entire Northern Hemisphere."
Their findings are in contrast to estimates by the World Health Organization and the The Iirnternational Atomic Energy Agency that initially said only 31 people had died among the "liquidators," those approximately 830,000 people who were in charge of extinguishing the fire at the Chernobyl reactor and deactivation and cleanup of the site.
The book finds that by 2005, between 112,000 and 125,000 liquidators had died.
"On this 24th anniversary of the Chernobyl disaster, we now realize that the consequences were far worse than many researchers had believed," says Janette Sherman, MD, the physician and toxicologist who edited the book.
Drawing upon extensive data, the authors estimate the number of deaths worldwide due to Chernobyl fallout from 1986 through 2004 was 985,000, a number that has since increased.
By contrast, WHO and the IAEA estimated 9,000 deaths and some 200,000 people sickened in 2005.
On April 26, 1986, two explosions occured at reactor number four at the Chernobyl plant which tore the top from the reactor and its building and exposed the reactor core. The resulting fire sent a plume of radioactive fallout into the atmosphere and over large parts of the western Soviet Union, Europe and across the Northern Hemisphere. Large areas in Ukraine, Belarus, and Russia had to be evacuated.
Yablokov and his co-authors find that radioactive emissions from the stricken reactor, once believed to be 50 million curies, may have been as great as 10 billion curies, or 200 times greater than the initial estimate, and hundreds of times larger than the fallout from the atomic bombs dropped on Hiroshima and Nagasaki.
Nations outside the former Soviet Union received high doses of radioactive fallout, most notably Norway, Sweden, Finland, Yugoslavia, Bulgaria, Austria, Romania, Greece, and parts of the United Kingdom and Germany.
About 550 million Europeans, and 150 to 230 million others in the Northern Hemisphere received notable contamination. Fallout reached the United States and Canada nine days after the disaster.
The proportion of children considered healthy born to irradiated parents in Belarus, the Ukraine, and European Russia considered healthy fell from about 80 percent to less than 20 percent since 1986.
Numerous reports reviewed for this book document elevated disease rates in the Chernobyl area. These include increased fetal and infant deaths, birth defects, and diseases of the respiratory, digestive, musculoskeletal, nervous, endocrine, reproductive, hematological, urological, cardiovascular, genetic, immune, and other systems, as well as cancers and non-cancerous tumors.
In addition to adverse effects in humans, numerous other species have been contaminated, based upon studies of livestock, voles, birds, fish, plants, trees, bacteria, viruses, and other species.
Foods produced in highly contaminated areas in the former Soviet Union were shipped, and consumed worldwide, affecting persons in many other nations. Some, but not all, contamination was detected and contaminated foods not shipped.
The authors warn that the soil, foliage, and water in highly contaminated areas still contain substantial levels of radioactive chemicals, and will continue to harm humans for decades to come.
The book explores effects of Chernobyl fallout that arrived above the United States nine days after the disaster. Fallout entered the U.S. environment and food chain through rainfall. Levels of iodine-131 in milk, for example, were seven to 28 times above normal in May and June 1986. The authors found that the highest U.S. radiation levels were recorded in the Pacific Northwest.
Americans also consumed contaminated food imported from nations affected by the disaster. Four years later, 25 percent of imported food was found to be still contaminated.
Little research on Chernobyl health effects in the United States has been conducted, the authors found, but one study by the Radiation and Public Health Project found that in the early 1990s, a few years after the meltdown, thyroid cancer in Connecticut children had nearly doubled.
This occurred at the same time that childhood thyroid cancer rates in the former Soviet Union were surging, as the thyroid gland is highly sensitive to radioactive iodine exposures.
The world now has 435 nuclear reactors and of these, 104 are in the United States.
The New York Academy of Sciences says not enough attention has been paid to Eastern European research studies on the effects of Chernobyl at a time when corporations in several nations, including the United States, are attempting to build more nuclear reactors and to extend the years of operation of aging reactors.
The academy said in a statement, "Official discussions from the International Atomic Energy Agency and associated United Nations' agencies (e.g. the Chernobyl Forum reports) have largely downplayed or ignored many of the findings reported in the Eastern European scientific literature and consequently have erred by not including these assessments."
To obtain the book from the New York Academy of Sciences, click here. Fonte ENS
Publicada por João Soares à(s) 23:24 Sem comentários:

On April 17th, 15,000 people gathered in the center of Madrid, calling the Spanish government which currently holds the EU Presidency for a GE-free future. This event marked the end of our GE-free future bus tour in the EU. Over the last few weeks, the bus, starting from Luxembourg, has passed several EU countries, calling for a moratorium on GE cultivation, and gathering signatures online and offline, as well as organising on Facebook. So far, over half a million people have called for this moratorium, alongside Greenpeace, Avaaz, and several other NGOs.

The tour was marked by several actions calling on governments to stand for the moratorium - the last one taking place in Spain, of course:

Finally, the GE-free future bus tour culminated in the rally in Madrid yesterday. 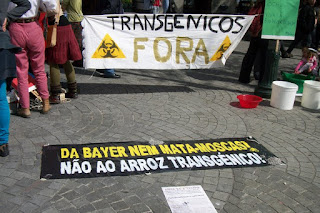 Oxygen from Christopher Hendryx on Vimeo.


In this brief two minute video by Christopher Hendryx we do in fact learn some great facts about Oxygen. Like all great lessons there is just enough entertainment mixed in with the knowledge to make sure we all pay attention. Be sure to notice the fantastic 50’s style narration. It definitely makes this video perfect!