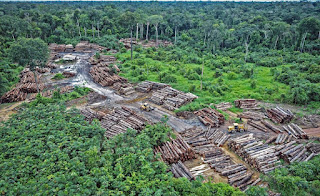 The world’s forests are being destroyed against a background of corruption, illegality and apathy.
A complex web of financial instruments allowing crime, corruption and wrong-doing, hidden behind shell corporations and offshore companies was exposed with the release of the Panama Papers.
This shadow network is being used by individuals and companies behind the destruction of our planet’s forests.
Indonesia has lost vast amounts of primary rainforest, behind only Brazil in scale for these losses. Some of the largest palm oil and timber companies operating in the country have disguised the extent of their operations through “shadow companies”. This means that who truly benefits from their activities is deliberately made harder or impossible to trace.
Indigenous
The Indonesian part of the island of Papua is a “new frontier” of palm oil deforestation in the country. This is against the express wishes of local Indigenous peoples. Previous deforestation went ahead despite Indonesian government officials claiming that the permits to do so in the region were falsified.
Companies were then given permission to continue clearing the forest as long as they “fix their permits”. In other words, as long as they retrospectively got the permits they needed from the start.
However, the forests of Papua may have been handed a lifeline: the Indonesian government has just cancelled 192 deforestation permits. For the sake of people, wildlife and the climate, they need to stay cancelled.
Forests will keep being cleared with impunity without financial transparency, accountability and enforcement.
The “clear forests first, apply for permits later” approach is not limited to Indonesia. In Paraguay, a government whistleblower provided evidence that the same problem was happening there. In that case, the deforestation included the lands of the Ayoreo Totobiegosode Indigenous peoples.
Deforestation
Where voluntary pledges have led to environmental successes they have been partial. The Amazon soy moratorium was designed to stop companies clearing Amazonia for the crop, and it has had some impact.
The rate of soy-related deforestation in Amazonia fell by 84 percent between 2004 and 2012, as a result of the moratorium and connected policy efforts.
However, this is arguably because companies have simply been able to shift to another, less protected biome; the neighbouring Cerrado, a precious ecosystem in its own right, which is now the frontier of deforestation in South America.
Data on corporate deforestation from the supply chain mapping initiative Trase show that companies who have pledged not to cause deforestation for soy cause as much as those who have made no such commitment.
Felled
The New York Declaration on Forests from 2014 pledged to halve deforestation by 2020 and end it by 2030, yet rates of forest loss have been 41 percent higher in the years since the agreement was signed.
The impact of pledges made at COP26 to reverse and end deforestation in a decade is yet to be seen, but it is noteworthy that the Brazilian Amazon started 2022 with the fastest rate of deforestation in 14 years.
Certification schemes purporting to ensure wood and timber products also have weaknesses. The assessment bodies responsible for conferring prized sustainability certification like the Forest Stewardship Council ecolabel are paid for by the companies they audit, competing with one another for this income. This creates a “race to the bottom” as it incentivises weak auditing in order to win more business.
These certification schemes have also been found to accredit illegally felled wood, including trees from protected forests in Siberia, some of which ended up in childrens’ furniture from IKEA.
Time-bound
No wonder, then, that many timber firms are lobbying to be exempt from upcoming EU laws to keep the products of environmental destruction and human rights abuses out of European supply chains. They claim that certified status – demonstrated to be flawed – should be enough to allow them this exemption.
While a great deal of forestry is not connected to crime, corruption, human rights abuses and the destruction of irreplaceable nature, far too much is. All our most basic human rights depend on a sustainable environment. We cannot let it be destroyed for a handful of people to profit.
Without financial transparency, accountability, and enforcement of strong laws to protect forests, they will keep being cleared with impunity.
States must step in and pass legislation which requires robust, transparent and time-bound reductions in deforestation for companies wishing to be part of their supply chains. The future of people and the planet depends on it.
Fonte: The Ecologist
Publicada por João Soares à(s) 19:03