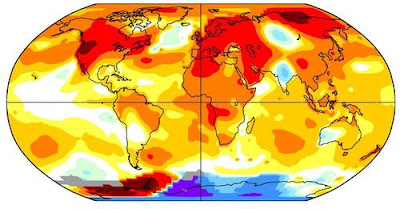 The authors say tropical coral reefs, the Amazon rainforest, and the West Antarctic and Greenland ice sheets may have passed dangerous tipping pointsThis map shows how land and ocean temperatures have changed from June 2021 relative to the 1951-1980 base period. High values (darker red colors) indicate temperatures that are higher than those in the base period. The number in the top right is an estimate of the global mean temperature increase. All temperatures are in Celsius. (NASA GISS Surface Temperature Analysis)
By Alex Fox
In 2019, a coalition of 11,000 scientists declared a global climate emergency along with a paper detailing the worrying trends of the past 40 years across what the authors call the planet’s vital signs. These vital signs are meant to capture Earth’s health and include metrics such as concentrations of greenhouse gases in the atmosphere, the amount of heat absorbed by the oceans, ice sheet mass and deforestation.
Now, the coalition of scientists who signed the climate emergency declaration has swelled to 14,000 signatures and researchers have released a new study on the health of our planet that suggests many of Earth’s crucial systems are nearing or have already blown past dangerous tipping points, reports Katharine Gammon for the Guardian.
The study, published in the journal Bioscience this week, found the planet set new and troubling records on 16 of the 31 vital signs tracked by its authors in the past two years. The authors write these trends “largely reflect the consequences of an unrelenting ‘business as usual’ approach to climate change policy.”
Writing in the Conversation, the study’s lead authors note the “surge in climate related disasters since 2019” has been “especially troubling.” By way of example, the authors mention flash floods in the South Kalimantan province of Indonesia, record heat waves in the southwestern United States, extraordinary storms in India and the 2019-2020 megafires in Australia. But in the last several months a litany of new disasters produced by extreme weather have seared themselves into public consciousness.
Driving the increased prevalence of these extreme weather events are the greenhouse gases that are at the root of our planet’s rapidly warming climate, reports Brandon Specktor for Live Science. The report finds concentrations of the three most important greenhouse gases—carbon dioxide, methane and nitrous oxide—are at all-time highs and that emissions of those gases have also continued to rise, setting a new record every year.
In a statement, the study’s lead author, ecologist William Ripple of Oregon State University, says “there is growing evidence we are getting close to or have already gone beyond tipping points associated with important parts of the Earth system, including warm-water coral reefs, the Amazon rainforest and the West Antarctic and Greenland ice sheets.”
A few bright spots identified by the study include record increases in solar and wind energy, as well as institutions divesting money from the fossil fuel industry, per Live Science.
The study’s authors recommend a three-pronged approach to tackling the climate emergency in the immediate term that includes a globally implemented carbon price, a phase-out and eventual ban of fossil fuels, and the creation of environmental reserves to safeguard and restore natural carbon sinks and biodiversity.
“We need to stop treating the climate emergency as a stand-alone issue—global heating is not the sole symptom of our stressed Earth system,” says Ripple in a statement. “Policies to combat the climate crisis or any other symptoms should address their root cause: human overexploitation of the planet.” Ripple adds that these new climate policies should be folded into COVID-19 recovery plans where possible.
Publicada por João Soares à(s) 18:30