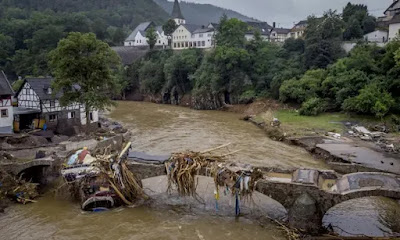 Young victims of the climate crisis will on Tuesday launch legal action at Europe’s top Human Rights Court against an energy treaty that protects fossil fuel investors.
Five people, aged between 17 and 31, who have experienced devastating floods, forest fires and hurricanes are bringing a case to the European court of human rights, where they will argue that their governments’ membership of the little-known energy charter treaty (ECT) is a dangerous obstacle to action on the climate crisis. It is the first time that the Strasbourg court will be asked to consider the treaty, a secretive investor court system that enables fossil fuel companies to sue governments for lost profits.
“It just can’t be that the fossil fuel industry is still more protected than our human rights,” said Julia, a 17-year-old high school student from Germany, who said she was joining the legal challenge after catastrophic lethal floods came to her home region, the Ahr valley, last July.
She and her parents had to flee their home when the flood waters came. Recalling the escape with the water around her hips, she said: “It was really scary and going through the water felt like losing the ground underneath my feet.” During the floods 222 people died in Germany and Belgium. “So that’s why I decided to join this legal action, to fight against the energy charter treaty still protecting the fuel industry.”
The claimants are suing 12 ECHR member states, including France, Germany and the UK because these countries are home to companies that have been active users of the ECT charter. The German energy company RWE is suing the Netherlands for €1.4bn (£1.2bn) over its plans to phase out coal; Rockhopper Exploration, based in the UK, is suing the Italian government after it banned new drilling near the coast.
The claimants argue that membership of the ECT violates the right to life (article two) and right to respect for private and family life (article eight) of the European convention on human rights.
The case comes as the ECT falls under growing scrutiny. The treaty – which has about 55 member countries, including EU states, the UK and Japan – has been described as a real threat to the Paris agreement; it could allow companies to sue governments for an estimated €1.3tn until 2050 in compensation for early closure of coal, oil and gas plants. Activists and whistleblowers say these vast sums would stymie the green transition, while time is running out to keep within the 1.5C global heating limit.
The legal action comes as a letter to EU leaders by 76 climate scientists seen by the Guardian says that continuing to protect fossil fuel investors under ECT rules would prevent the closure of fossil fuel plants or ensure huge compensation payouts if shutdowns went ahead.
“Both options will jeopardise the EU climate neutrality target and the EU Green deal,” said the letter, which calls for the current French presidency of the EU to work towards a withdrawal of member states from the treaty. “In these days of climate and energy struggles, the EU climate leadership is more than ever needed to ‘make our planet great again’.”
And later this week ECT members will meet to negotiate the “modernisation” of the 1994 treaty. The European Commission, which negotiates on behalf of the EU’s 27 member states, has proposed a gradual phase out of fossil fuel investor protection by the end of 2040.
Campaigners said this is too little too late, and fault a compromise proposal seen as designed to placate countries that want to protect fossil fuel investors, such as Japan. “The options that are being discussed are too weak to make the ECT compatible with the Paris agreement or with EU law,” said Cornelia Maarfield, senior trade and investment policy coordinator at the Climate Action Network Europe.
France, Germany, the Netherlands, Poland and Spain have already instructed the commission to study how the EU could withdraw from the ECT, amid scepticism that the treaty can ever be compatible with the EU’s climate goals, according to leaked documents published by the Euractiv website last month.
The ECT secretariat, based in Brussels, argues that the ECT does not privilege fossil fuels and upholds the rule of law for investors.
Activists rejected this characterisation. “We are not advocating that they break international law,” said Maarfield. “Even in the ECT, there is a clause about withdrawal. So there is absolutely no breaking any law to withdraw from an agreement, according to the rules that are stipulated in this agreement. And the withdrawal procedure in ECT is very easy.”
Ler mais:
Desmascarando os mitos do Tratado da Carta da Energia
Publicada por João Soares à(s) 11:03