Is the way we think about overpopulation racist?

Half the world lives in urban areas, yet environmental concerns about megacities often focus on developing economies. But consumption is as important as population. 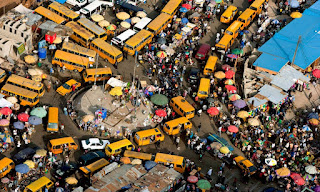 It is just 50 years since the publication of Paul Ehrlich’s book The Population Bomb galvanised the global discussion on overpopulation. Published in 1968, his million-selling Malthusian polemic suggested that over-breeding poor countries were killing the planet. And it began in a megacity: India’s capital, Delhi.
On the first page, he wrote of a taxi ride “one stinking hot night in Delhi. We entered a crowded slum area. The streets seemed alive with people. People eating, people washing, people sleeping. People visiting, arguing and screaming. People thrusting their hands through the taxi window begging. People defecating and urinating … Since that night I’ve known the feel of overpopulation.”
But did he? Was he describing a city stretched beyond its limits, in a world similarly stretched? As the Australian demographer Jack Caldwell later pointed out, he could have seen as many people in similarly crowded conditions during any rush hour in London, Paris or New York. “What he did see were poor non-Europeans.”
This is the rub when we express fears about the teeming megacities of the developing world. Whether it is Delhi or Dhaka, the shanty towns of Nairobi or the favelas of Rio de Janeiro, are we just reacting badly to people different from us? Is there sometimes a tinge of racism in our environmental concerns?
Ehrlich was not wrong that cities matter hugely for the future of humanity. Our planet is crowded and half of us live in urban areas. That figure is predicted to rise to 66% by 2050. It is the giant urban areas of developing countries such as India that are experiencing most of the growth.
Despite appearances, cities are not the cause of rising human numbers. In fact, they are the solution
But are these megacities really the problem, or just the most visible manifestation of our crowded world? And, if they are a problem, is it the cities of the rich or the poor world that should concern us?
Despite appearances, cities are not the cause of rising human numbers. In fact, they are the solution. People in cities almost everywhere tend to have fewer children than their compatriots in rural areas. The average woman in Kenya has 4.3 children, whereas those living in the capital, Nairobi, have just 2.7. In India the average is 2.4 children, but in Delhi it’s just 1.6 and in Mumbai 1.4. That’s lower than London, where the average is 1.72.
This demographic divide between town and country is not so surprising. On a rural farm, children are handy for looking after the goats or helping with the harvest. In cities, they are expensive to feed and need educating before they can start earning.
Urban numbers are rising only because of the global rush of migrants from rural areas to the cities in search of jobs. Once there, they swiftly adopt small families as the norm. Anyone concerned about overpopulation should cheer them on.
Of course, that is not the whole story. While cities are defusing the population bomb, they are also creating a consumption bomb. Urbanites consume more stuff. Cities may house half the world’s population, but they consume three-quarters of the materials we take from the planet – whether that’s minerals or crops, timber or meat.
Prince Charles once called the Mumbai shanty town Dharavi a model of green development. Many laughed. He was right
Cities are heavily dependent on the world beyond their limits. These hinterlands provide water, materials and food, as well as human resources such as commuters. One study found that annually, London consumes almost 40m tonnes of construction materials, 2.4m tonnes of food, 2.2m tonnes of paper, 2.1m tonnes of plastic, 0.4m tonnes of glass and 1.2m tonnes of metal. Its citizens drink, shower and flush a billion tonnes of water. Meanwhile it disgorges 8m tonnes of sewage and 4m tonnes of household waste.Cities build huge amounts of infrastructure: roads, sewers, high-rise blocks and metro systems. As part of its breakneck urbanisation programme, China’s vast construction industry used more cement in the three years from 2011 to 2013 than the US managed in the entire 20th century. No wonder environmental pessimists see cities – especially the fast-growing cities of the developing world – as environmental cancers.
Ideas factories
But there is another side. Some people argue that the very concentration of humans in cities – the hordes of people that so alarmed Ehrlich – is the key to unlocking a sustainable future for us all. In short: the challenges of city life necessitate solutions.
Their sheer density means that cities can carry out various eco-friendly processes much more efficiently, like recycling waste and replacing cars with buses, trains and bicycles. And the denser the better. Compact cities like London, Paris or Copenhagen require far fewer car journeys than those with sprawling suburbs.
Indian shanty towns may have frightened Ehrlich, but what he was seeing was far from an environmental armageddon. Shanty towns could often use better sanitation, of course. Some lack reliable electricity and endure high crime rates. We should not romanticise them. But they have a lot to teach us about green living. They are high-density neighbourhoods, their alleys are largely pedestrianised, and many of their inhabitants are inveterate recyclers of the surrounding city’s refuse.
One of the biggest and densest in Asia is Dharavi in Mumbai, where the hero of the movie Slumdog Millionaire was brought up. Smithsonian Magazine, a respected journal, has called it “a vision of urban hell”.
But when I visited, I saw a thriving community. More than half a million people are packed into an area full of workshops and retail outlets, schools and clinics, bakeries and drug dispensaries, with schoolchildren in neat uniforms walking home hand-in-hand through lanes safe from traffic or hoodlums. Most homes had power and water. Prince Charles once called Dharavi a model of green development. Many laughed. But he was right.
Fonte: Guardian, 19/03/08
Publicada por João Soares à(s) 10:00