Germany and UK are big exporters of plastic, much of which lies rotting in ports in Turkey, Vietnam and other countries. 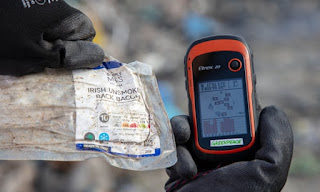 One hundred and 41 containers filled with rotting plastic waste have been on a journey for more than a year. Scattered between Turkey, Greece and Vietnam, far from their origins in Germany, the containers’ voyage sheds light on the hidden global trade in plastic waste.
Arriving in Turkey in late 2020, shortly before a ban on mixed plastic waste imports came into force, the containers quickly became the centre of a battle between traders, a shipping line, multiple governments and environmental campaigners demanding their return.
Turkish authorities refused entry to the containers, leaving them in limbo. As they languished in ports across the country, the contents began to rot. “After a couple of months, all the dirty waste inside was disrupted, and some had fermented due to the presence of micro-organisms. It smelled really bad and it was covered in rats and mice,” said Sedat Gündoğdu, a plastics pollution researcher based in the southern city of Adana.
The year-long saga of the 141 containers is a small slice of the international trade in plastic waste, the ugly underbelly of recycling in the global north. Plastic waste, especially mixed plastic from households, is frequently sent overseas to countries with lax environmental regulations, where it is melted into plastic pellets, dumped, or simply burned.
Mixed plastics are the dirtiest and least desirable waste in the trade, as they typically contain household rubbish such as bottles or packaging, meaning a jumble of recyclable plastics with non-recyclable items. As many countries move to ban mixed plastic imports, observers say some traders have taken to hiding bales of banned mixed plastics behind others that pass regulation to sneak them past inspectors.
The containers remained stuck after a company involved in their initial journey lost its import licence and disappeared. “The consignee delayed us saying there were some things to sort out with customs. But then we found out their import licence was cancelled, and they were blacklisted by Turkey. Lab tests showed some loads in the containers are hazardous city waste,” said Omer Bulduk of Monax, a Turkish freight company assigned to receive the containers. “It’s simply garbage,” he added.
Some of the countries listed among the world’s top recyclers are also the biggest plastic waste exporters: Germany was named the world’s top recycler by the World Economic Forum three years ago, but exports an average of 1m tonnes of plastic waste annually, more than any other nation in the EU. The UK is little better, exporting 61% of its plastic waste according to recent data from the British Plastics Foundation.
“When you continue to consume more plastic there are only two ways to tackle the waste. One is incineration, the second is dumping. If you don’t have dumping in your country then you should incinerate. But this has a carbon footprint, and many countries trying to cut carbon emissions don’t want to incinerate their own waste,” said Gündoğdu.
“Some of the top waste producers in Europe, like the UK, France and Germany have to find ways to deal with this issue. And the way they’ve found is exporting to poorer countries without effective waste management systems or environmental legislation and regulations. This is waste colonialism,” he said. 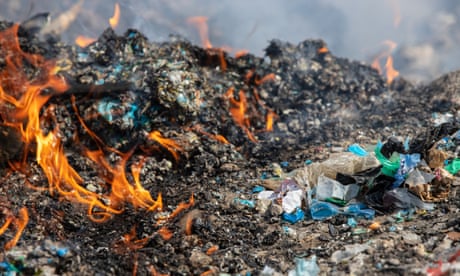 Read more
In May, the Turkish foreign ministry contacted their counterparts in Germany to demand the containers’ return. According to Bulduk, the German side “claimed that too much time had passed and they cannot accept them”. Angela Griesbach, a spokesperson for the waste management authority in the state of Baden-Württemberg, now in charge of overseeing the containers, said this was “probably a misunderstanding”, adding that the containers contained waste that was legal when it arrived in Turkey.
When some of the containers of German waste were suddenly re-exported to Vietnam, campaigners sprung into action. Activists believe that the 16 containers sent last July to the port of Hai Phong were a test, to see if others could later follow the same route in order to dispose of the rotting containers entirely. But who authorised their onward travel remains a mystery, especially as sending waste directly from an EU country to those outside the OECD is banned, and new controls on mixed plastic exports introduced last January require express consent from the Vietnamese authorities to import the containers.
Vietnam’s own ban on plastic waste imports is due to go into force in 2025, but it remains a popular destination for the global plastic recycling trade. There, workers are paid less than £5 a day to sort plastic into recyclable elements and non-recyclable. The former are melted down, exposing those nearby to toxic fumes.
Jim Puckett of the Basel Action Network, a group that campaigns against plastic-related pollution, tracked 37 of the German containers heading towards Piraeus port near Athens in November, and grew suspicious they were also headed to Vietnam.
“I dropped what I was doing and sent a strong message to the Greek authorities, saying that they couldn’t allow that waste to get on a ship and go to Vietnam. It’s illegal and it should be returned to Germany,” he said. The Greek authorities took note, and cordoned off the containers on the dock in Piraeus, where they remain.
“There’s also almost a hundred containers sitting in Turkey, and we’re very worried they will be bound for countries like Vietnam,” he added. In an open letter to Germany’s newly inaugurated environment ministry, a coalition of green groups including BAN demanded they “take moral and political leadership” and reclaim the 141 containers.
When contacted by the Guardian, the environment ministry referred questions to Griesbach. “The campaigners are right in saying that there are many legal questions and legal grey areas,” she said. She stressed that “a voluntary return shipment by a German company involved is intended but has not yet been possible,” and said the German authorities were unaware that some containers had been re-exported to Vietnam.
If certain conditions were met, she added, the containers in Turkey could be returned. “If the problem is not an internal Turkish enforcement problem, the German authorities, as well as the German company voluntarily, are willing to take back this waste in accordance with the law. However, this requires the corresponding cooperation and information from the Turkish side.” The Turkish environment ministry did not respond when contacted for comment on the issue.
Vietnam and Turkey are two of a growing number of countries that have reported a sudden spike in plastic waste, after China’s decision to ban waste imports in 2018 proved to be a watershed for the global trade. The decision “reverberated around the world”, according to the United Nations, which added that nations in the global north “will, at last, have to face up to the true cost of their plastic addiction instead of shipping the problem to China, which has taken nearly half the world’s waste since 1992”.
“We’ve been sold a notion of ‘don’t worry, we’ll recycle it’ – and no one looked at what recycling was like in China until three years ago,” said Puckett. “We’re putting out more plastic waste into the world, every day more than the day before, and there’s no destination for it. It’s now become a game of who will take it because there are mountains of plastic waste and it’s not stopped.”
The result is a frantic hunt for new destinations for an estimated 111m metric tonnes of plastic waste displaced by the ban between now and 2030. While China has banned imports, it continues to profit from the global trade in plastics through its domination of the shipping trade. Cosco shipping, the company that transported all 141 containers, is a Chinese state-owned company. Cosco did not respond when contacted for comment on the issue.
Matthew Gordon, an environmental researcher at Yale University who is part of a team compiling an “atlas of plastic waste” to show new plastic dumping sites across the world, said he was surprised by the number of countries represented in their initial findings, including Bosnia, Thailand, Romania, Malaysia and Turkey.
“South-east Asia clearly seems to be a hotspot, especially in the aftermath of the China import ban,” he said. “One of the reasons for this seems to be that when container ships travel from places like China to the US carrying manufactured goods, they offer extremely low freight on the return trip – otherwise they would be going back empty. So exporters in the US often find it cheaper to send plastics abroad than to deal with them at home.” 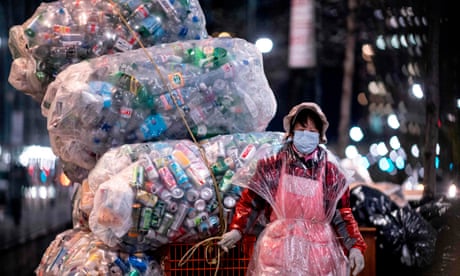 Read more
Turkey has increasingly found itself on the frontline of the struggle between local plastic importers’ desire to stay in the global recycling trade and rising environmental concerns. After an investigation by Greenpeace found plastic products from British and German supermarket chains intended for recycling dumped by the roadside, Turkey briefly banned all plastic imports last May before rescinding the law soon afterwards. Gündoğdu said new dumping grounds for plastic waste were springing up again after a brief lull.
In Adana, a hub for plastic waste imports, a coalition of local plastics traders wrote their own open letter to the Turkish president, Recep Tayyip Erdoğan, imploring him to allow the industry to continue. The letter was part of a campaign to rebrand plastic waste imports, under the slogan “It’s not waste, it’s raw material.”
The plastic waste industry, they said, employs 300,000 Turkish people. Traders described themselves as “the ones cleaning the environment, not polluting it”.
Many Turkish citizens disagree. When asked how they felt about the 800,000 tonnes of plastic waste that Turkey imported last year from the EU, a majority said “very bad”, while others cited a slogan that is rapidly becoming a rallying cry against plastic imports in their country: “Turkey is not a garbage bin.”
Publicada por João Soares à(s) 10:00