'Either we change or we die': the radical farming project in the Amazon 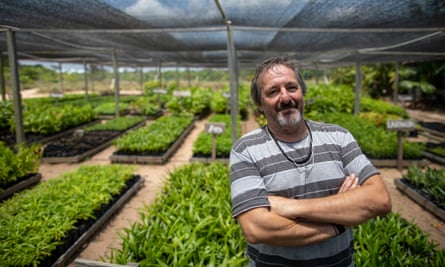 Doctor Eugenio Scannavino Netto, one of the creators of the Health and Happiness Project (PSA), at the seed bank.
Photograph: João Laet/The Guardian

Dom Phillips in Carão
Published onSat 27 Jun 2020
The cumaru trees could have been planted elsewhere in this Amazon reserve, where they had better chances of flourishing. Instead, they were planted in harsh, sandy soil in the dry savannah that breaks up the forest. Jack beans, guandu peas and other crops were planted in straw around them with cut savannah grass, for moisture and compost. “We call it the cradle,” says agronomist Alailson Rêgo. “It protects them.”
The hope is that if these Amazon-native trees – whose seeds can be used in cosmetics – thrive on this sandy soil and a nearby patch of deforested, burned land, they can regenerate abandoned pasture elsewhere. In the Amazon, more land is cleared for cattle than anything else. It’s easier enough to clear – chop down a few trees, light a few fires. But restoring the forest? Bringing back the life and the greenness? That is far, far harder. 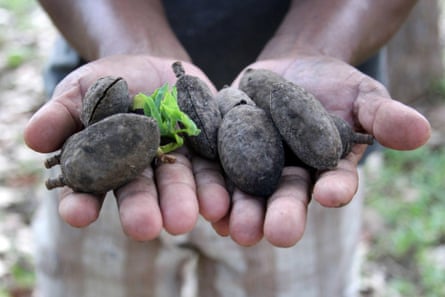 Seeds for cumaru trees, which are being planted in burned and razed areas of the Amazon rainforest. Photograph: Foto Arena LTDA/Alamy Stock Photo
Located in the secluded Amazon reserve of Tapajós-Arapiuns in Brazil’s Pará state, the Experimental Active Forest Centre (CEFA) was set up in 2016 to solve problems like this. It is a research and development centre where farming within the forest, or agroforestry, rather than clearing it for cattle or soya, is the focus. And it is part of a growing movement for sustainable agriculture in Brazil that has taken on a new urgency with the coronavirus pandemic, as scientists warn that the climate crisis and land development heighten the chances of another deadly virus jumping from animals to humans.
“It is a way of dealing with nature that is playing with the apocalypse,” says Eugenio Scannavino Netto, the doctor and infectious diseases specialist who helped set up the centre. “We are heading for collective suicide.”
Now 61, Scannavino Netto has spent three decades in the rainforest working on Amazon solutions. In 1987, he founded the non-profit Health and Happiness Project, known by its Portuguese initials PSA (Projeto Saúde e Alegria), in nearby Alter do Chão. The group helps sustainable community development while providing health and education services for remote communities using a hospital boat and clowns. Last year it was judged one of the 100 best NGOs in Brazil.
The centre’s aims are ambitious, but equally practical: 40,000 seedlings from its nursery will be donated to local communities to reforest areas in the reserve cut down and burned for cattle or traditional farming. These include pau-brasil, grown to be sold as wood; urucum, whose seeds are traditionally used as a body paint by the Amazon’s indigenous peoples and sold for colourant in lipstick; and pau-rosa, whose leaves are used in perfume.
“The culture here is slash and burn, and we’re trying to change that,” Scannavino Netto says.
A collection of beehives houses stingless bees. Smallholder Joelma Lopes, 46, from the nearby community of Carão, learned beekeeping here and now subsidises her income by selling honey from her own bees. “It was a door that opened to a lot of knowledge,” she says.
Moacir Imbiriba, 40, a Kumaruara indigenous man who works at the centre, says children in his village now use agroforestry techniques in their vegetable garden. “Many leaders consider this an evolution for the communities,” he says. 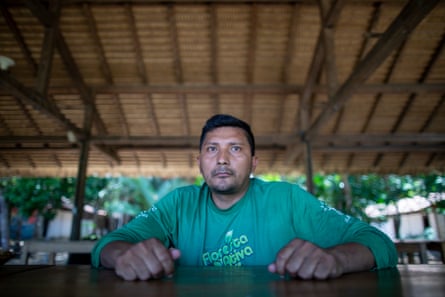 Moacir Imbiriba, a Kumaruara indigenous man, works for the PSA project supporting sustainable community development. Photograph: João Laet/The Guardian
But while the PSA’s projects in this region have been widely praised for benefits such as reducing infant mortality, police raided its headquarters in Alter do Chão last November. Officers arrested four firefighters from a volunteer brigade who tackled blazes in local reserves during last year’s Amazon fires – one of whom worked for the NGO. Documents and computers were seized.
The police inquiry has alleged that the firefighters were setting the fires in reserves near Alter do Chão – a beauty spot with popular beaches – to get international money. Serious failings in the inquiry’s work were exposed by Brazilian media. Federal prosecutors investigating land grabbers suspected of setting fires in the same reserve said they had found no evidence of volunteer firefighters or NGOs being involved.
The inquiry, suspended during the pandemic, is yet to conclude. But the police raid came weeks after Brazil’s far-right president, Jair Bolsonaro, accused NGOs of setting Amazon fires without providing any evidence. “This is much more a political operation than a technical, police operation,” says Scannavino Netto.
In fact, the PSA aims to be inclusive rather than politically divisive. Last year it organised a sustainable agriculture event in the nearest city of Santarém. The idea, says Caetano Scannavino, Scannavino Netto’s brother and the PSA’s coordinator, was simple. He says: “How can we produce an agenda that unites the environmental movement, the indigenous movement and the agribusiness sector?” 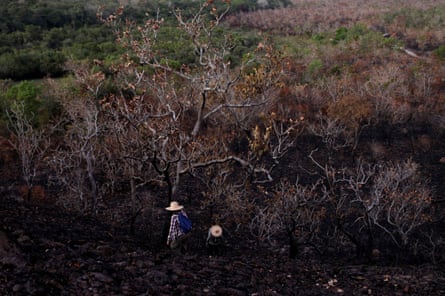 Biologists, who are researching a burned area of the Amazon forest in Alter do Chão, in Santarém. Photograph: Ricardo Moraes/Reuters
Rogério Vian, a farmer from Goiás state, who farms organic and sustainable soya, spoke at the event. He is one of a nationwide group of farmers working on sustainable farming techniques and reducing pesticide use – what he calls a middle way between full organic and conventional farming.
“Farmers need the forest and environment more than anyone else,” he says. “Why not produce and conserve? You can do it all at the same time.”
Another speaker was Ernst Götsch, 72, a Swiss farmer who developed a system of growing crops and trees together he calls “syntropic” agriculture on a farm in Bahia in north-east Brazil. “We have 50-60 different species of trees and palm trees per hectare. It’s very diverse. I don’t use any fertiliser, I don’t use any pesticides,” he says. Agroforestry techniques like this were used by indigenous communities before Spanish and Portuguese explorers arrived. “They had similar strategies,” says Götsch.
Now the coronavirus pandemic has given farmers more reasons to change. As the Netflix series Pandemic revealed, scientists and researchers have found thousands of other zoonotic diseases like the new coronavirus and fear that another virus could jump to human beings, like avian and swine flu or Mers. 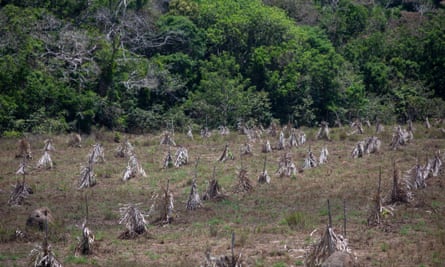 Planting of cumaru seedlings for reforestation. Photograph: João Laet/The Guardian
Deforestation has already been blamed for the 1999 Nipah virus outbreak in Malaysia that killed 105 people after it jumped from bats to pigs and then people. The outbreak inspired the 2011 movie Contagion, starring Gwyneth Paltrow.
In March, Scannavino Netto argued in Brazil’s Folha de S.Paulo newspaper that the monocultures of modern agriculture were destroying everything from biodiversity to insects that serve as “bioregulators”. Cutting down the Amazon changes animal behaviour and heightens the risk of another, much more lethal virus jumping to humans.
Covid-19 has been a warning. “Either we change,” he said in a recent phone interview, “or we will die in the next pandemic. And it will be fast.”
Publicada por João Soares à(s) 11:56