Respighi was a musicologist as well as a composer, and he used the music of the past as inspiration for some of his compositions. The Birds is a suite of pieces that are based on various 18th century composers. It is an attempt to depict (somewhat stylized) bird songs of the Dove, Hen, Nightingale and Cuckoo. The composer uses the woodwind section of the orchestra for the bird imitations to good effect. Respighi conducted the premiere of the work in Brazil in 1928.

The Birds consists of 5 movements 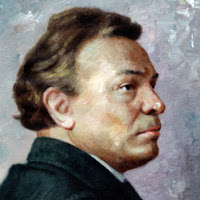 I. Prelude - This prelude acts as a mini-overture for the rest of the work. The first-heard melody in the prelude is based on an opera aria by the Italian composer Bernardo Pasquini (1637-1710) , who was not only a composer but a virtuoso keyboardist, perhaps the greatest keyboard player of his generation. He wrote operas, cantatas, many works for voice, and music for keyboard. He was an outstanding teacher and may have taught Domenico Scarlatti. He may have been the first composer to write three-movement sonatas for keyboard. After this melody, there is a medley of the bird songs that comprise the rest of the work, and the Pasquini melody returns again to finish the prelude.

II. The Dove - This movement is based on the music of French composer and lutenist Jacques de Gallot (ca.1625-1700). A solo oboe plays gently with the accompaniment of harp and strings. Trills in the strings imitate the flutter of wings while the melody is given to clarinet, then the solo violin.

III. The Hen - This is based on the music of the French harpsichordist, composer and theorist Jean-Philippe Rameau (1683-1764). Rameau's music is seldom heard in the concert hall, but he was one of the great musicians of the Baroque era and the history of music in general. It was Rameau who codified what had been going on for a hundred years in music, basing music on harmony instead of counterpoint. He was the culmination of the Baroque era in France, much like J.S. Bach was in Germany. The music starts with the clucking of a hen and before it is over the entire hen house is a stir.

IV. The Nightingale - The only thing known about the next melody is that it originated in England in the 18th century. Respighi orchestrates the gentle melody with the appropriate winds, and even has the solo horn gently sing the melody.

V. The Cuckoo - Another melody from Pasquini, this one from a harpsichord piece. The woodwinds imitate the cuckoo, the melody from the prelude is heard once again to round off the piece and the work is finished.