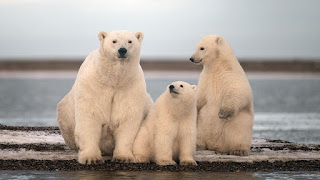 A coalition of conservation groups sued the Biden administration on Thursday over the U.S. Department of the Interior's recent rule allowing fossil fuel companies to harass polar bears and walruses while searching and drilling for oil and gas in the Southern Beaufort Sea.

Announced last month by the U.S. Fish and Wildlife Service (USFWS), the rule was quickly blasted as "disturbing" by Kristen Monsell, an attorney at the Center for Biological Diversity, one of the groups behind the new federal lawsuit in Alaska.

The suit accuses the Interior Department and USFWS of violating the National Environmental Policy Act, the Marine Mammal Protection Act, and the Endangered Species Act.

"The Biden administration flouted the law in allowing oil companies to continue their noisy, harmful onslaught on polar bears," Monsell said Thursday. "We're hopeful the court will overturn this dangerous rule that puts polar bears in the crosshairs."

Monsell, whose group is representing itself and Friends of the Earth in the case, also called out President Joe Biden for promising "bold action to address the climate crisis" while "allowing business-as-usual oil drilling in the Arctic."

Bridget Psarianos, an attorney with the law firm Trustees for Alaska, charged that "the Biden administration ignored the law and its own science and handled the process as if stamping an oil-industry punch card."

"The Fish and Wildlife Service has a legal obligation to do a thorough analysis of the potentially lethal effects of industry's harassment of polar bears," she added, "and to consider ways to avoid and minimize that harm."

Trustees for Alaska is representing the Alaska Wildlife Alliance, Alaska Wilderness League, Defenders of Wildlife, Environment America, and the Sierra Club, which also represents itself. Representatives for the groups outlined how industry activity threatens the region's polar bears.

"'Harassment' is a fancy legal way of saying that an action can disturb or injure polar bears," explained Nicole Schmitt, executive director of Alaska Wildlife Alliance. "This Fish and Wildlife Service rule allows oil and gas companies to harass almost half of the polar bears left in the Southern Beaufort Sea population, double the harassment that occurred under the last regulation."

Such harassment includes scaring the animals with noise and equipment as well as disrupting denning and feeding. The organizations warn these actions can be fatal, especially for young bears.

Nicole Whittington-Evans, director of Defenders of Wildlife's Alaska Program, warned that "unchecked oil and gas development in Alaska's Arctic impedes the survival of Southern Beaufort Sea polar bears, already one of the world's most imperiled populations due to climate change and habitat loss."

The regional polar bear population "has already declined by 50% during the last three decades—their survival is a bellwether for the future of a landscape and its people who are being ravaged by climate change," noted Kristen Miller, Alaska Wilderness League's acting executive director.

Whittington-Evans asserted that "we can't continue to send wildlife toward extinction in the name of fossil fuels, especially in a climate and biodiversity crisis."

As Steve Blackledge, conservation program director for Environment America, put it: "Extinction, after all, can't be rectified."

Reposted with permission from Common Dreams.