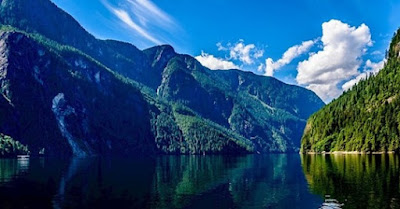 Sometimes the monstrous machine of industry and corporate greed can feel like too much for us as individuals to battle. But a bunch of Canadian citizens has just shown what a committed band of individuals can do.
In the first crowdfunding effort of its kind, Canadians have raised $3 million to purchase a stretch of coastal wilderness in British Columbia to save it from development. The 2,000 acres (800 hectares) of pristine coastline in the Princess Louisa Inlet on British Columbia's Sunshine Coast are virtually untouched. The land includes a fjord, the top rim of which branches into high alpine snow pack forming multiple dramatic waterfalls that run down the rock.
Crowdfunding efforts were organized by B.C. Parks Foundation, a non-profit group whose mission is to protect natural landscapes in the province. The foundation's CEO Andrew Day told the CBC that the land, which is being sold by a private owner, had some interest from logging companies and developers. So people stepped up to stop that from happening.
And it wasn't just a handful of rich donors who pooled their money—scores of average Canadians offered what they could to the fundraising effort.
Ler toda a notícia aqui
Publicada por João Soares à(s) 10:19