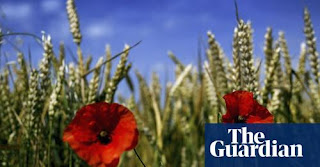 The prospect of genetically modified foods being grown and sold in the UK has come a step closer after changes to farming regulations that will allow field trials of gene edited crops in England.
Companies or research organisations wishing to conduct field trials will still have to notify the Department for Environment, Food and Rural Affairs, the government announced on Wednesday, but existing costs and red tape will be removed so more trials are likely to go ahead.
The immediate change is small, and affects only England, but the government says it will be followed by plans for new primary legislation that will allow far greater use of gene editing in crops in the UK, and a redefinition in law of genetic modification.
That could open the way to the sale of gene-edited crops developed in the field trials, and to further steps such as gene editing in animals, and potentially the production and sale of genetically modified organisms in the UK.
Science can rescue farming. Relaxing gene editing rules should be the start
George Eustice, the environment secretary, said: “Gene editing has the ability to harness the genetic resources that nature has provided. It is a tool that could help us in order to tackle some of the biggest challenges that we face – around food security, climate change and biodiversity loss.”
Ministers are keen to use Brexit to allow gene editing, a form of genetic modification that is heavily restricted in the EU, to be used in the UK, despite a public consultation that found 87% of people who responded viewed gene-edited crops as a greater risk than traditional crop breeding methods.
Gene editing involves using and modifying genes already found in an organism, unlike other forms of genetic modification, which can use genes imported from other plants or animals. Gene editing can be used to mimic the effects of traditional plant breeding but is accelerated as it is done in a laboratory instead of requiring years of repeated selective breeding.
Proponents say gene editing could safely be used to develop crops with increased yields or additional nutritional benefits, or that would be resistant to pests and disease and withstand drought, high temperatures or other effects of climate breakdown.
Scientists welcomed the changes. Angela Karp, the director and chief executive of Rothamsted Research, which had a field trial for gene-edited wheat approved before the changes, said: “Gene editing gives us a powerful new tool to accelerate the generation of plant varieties that can potentially be more nutritious, more resilient against climate change and grown with a reduced environmental impact.
“We look forward to building on our science in gene editing to help deliver the crops farmers will need to deliver on Cop26 emissions targets and beyond. We will now be able to scale up our field scale studies and accelerate the creation of new varieties that can future proof our farming.” 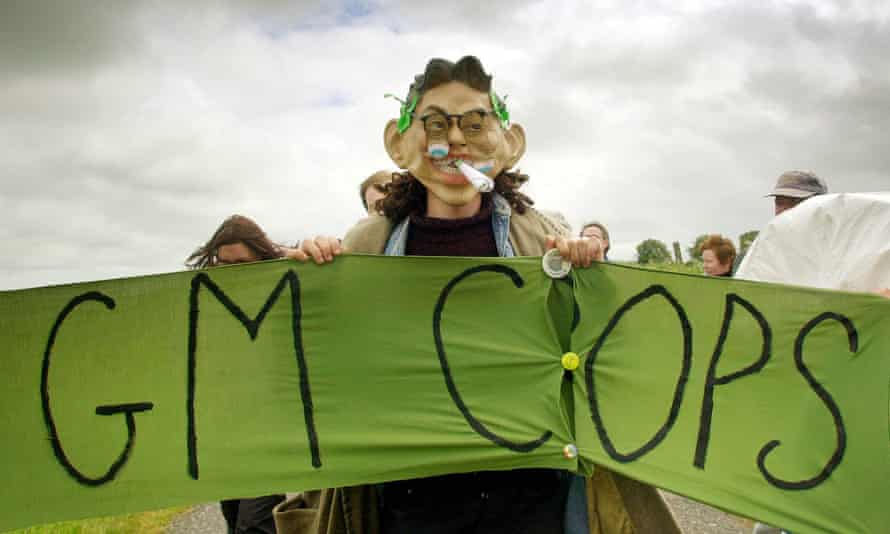 An anti-GM crop demonstrator from Earth First protesting in July 2000 at the site of Scotland’s only approved trial site for the crops near Daviot, Aberdeenshire. England plans to relax its GM crop rules. Photograph: Ben Curtis/PA
Guy Poppy, professor of ecology at the University of Southampton, also welcomed the development but said: “While I understand why Defra propose a proportionate step-by-step process, I do fear that the travel along that path will be slow, complex and fraught with continuing claims and counterclaims.”
However, campaigners said the government was overriding public concern on the issue. Liz O’Neill, director of umbrella group GM Freeze, said: “Genetic engineering – whatever you choose to call it – needs to be properly regulated. The government wants to swap the safety net of proper public protections for a hi-tech free-for-all – but our food, our farms and the natural environment deserve better.”
She added: “This announcement is described as a response to Defra’s consultation on the regulation of genetic technologies. However, no detail has been made available [at the time of writing] on what George Eustice actually learned from the exercise. The consultation submissions that GM Freeze has seen raised a wide range of concerns about Defra’s proposals for dismantling GM safeguards, but this announcement suggests the minister isn’t listening.”
Joanna Lewis, the director of policy and strategy at the Soil Association, said gene editing was the wrong approach and the government should instead focus on helping farmers become more sustainable.
“What would help is a reversal of the … lack of investment in agro-ecological, nature-friendly methods and farmer-led technology,” she said. “We should be investing in solutions that deal with the cause of disease and pests in the first place, including a lack of crop diversity, the decline in beneficial insects, and animal overcrowding. We must increase soil carbon, wildlife and animal welfare on farms to solve the climate and nature crises, and protect human health.”
Gideon Henderson, the chief scientific adviser at Defra, said the government was looking closely at the implications for any changes to the UK law on GM organisms for future trade deals. The EU and some other countries impose heavy restrictions.
Even if GM organisms and associated products were omitted from trade deals, there could be concerns that other agricultural goods could be affected – in crops, by potential cross-contamination, and in the case of meat by livestock consuming GM crops.
Publicada por João Soares à(s) 23:47