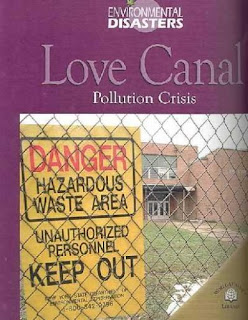 
*Love Canal* is a neighborhood in Niagara Falls, New York which became the subject of national and international attention, controversy, and eventual environmental notoriety following the discovery of 21,000 tons of toxic waste that had been buried beneath the neighborhood by Hooker Chemical.
Love Canal officially covers 36 square blocks in the far southeastern corner of the city, along 99th Street and Read Avenue. Two bodies of water define the northern and southern boundaries of the neighborhood: Bergholtz Creek to the north and the Niagara River, one-quarter mile (400 m) to the south. In this area, Grand Island is situated on the south shore of the Niagara River.
Hooker Chemical sold this site to the Niagara Falls School Board with a deed explicitly detailing the danger contained within the site, and including a liability limitation clause about the contamination. The construction efforts of housing development, combined with particularly heavy rainstorms, released the , leading to a public health emergency and an urban planning scandal. Hooker Chemical was found to be negligent in their disposal of waste, though not reckless in the sale of the land, in what became a test case for liability clauses. The dumpsite was discovered and investigated by the local newspaper, the Niagara Gazette, from 1976 through the evacuation in 1978.
Potential health problems were first raised by reporter Michael H. Brown in July 1978.Ten years after the incident, New York State Health Department Commissioner
David Axelrod stated that Love Canal would long be remembered as a "national symbol of a failure to exercise a sense of concern for future generations."
The Love Canal incident was especially significant as a situation where the inhabitants "overflowed into the wastes instead of the other way around."