Livro de férias: Gerry Gerstle- The Rise and Fall of the Neoliberal Order 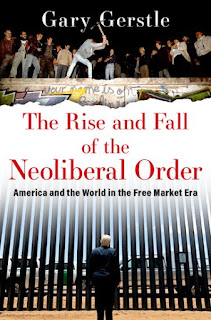 It’s rare that one can use the term “instant classic” in a book review, but Gary Gerstle’s latest economic history, The Rise and Fall of the Neoliberal Order, warrants the praise. It puts neoliberalism, defined as a “creed that prizes free trade and the free movement of capital, goods and people,” as well as deregulation and cosmopolitanism, in a 100-year historical context, which is crucial for understanding the politics of the moment, not just in the US but globally.
The book also knits together a century of very complicated economic, political, and social trends, which are often siloed but are in fact quite interrelated, creating a new and important narrative about where America has been, and where it may be going. One of the most useful things Gerstle does for readers is to blow up the usual definitions of conservative and liberal, at least in terms of how US economic history is framed. Former Republican presidents Ronald Reagan and both Bushes were “conservative”, while their Democrat peers Bill Clinton and Barack Obama were “liberals”. And yet all of them could be described as neoliberals, in the sense that many of their economic policies were at core about unleashing (or at least not restraining) capitalism, with the underlying belief that markets would, indeed, know best.
Capital, as always, moved faster than goods or people.  While decades of unchecked markets ultimately contributed to everything from the financial crisis, to the rise of both Donald Trump and Bernie Sanders (reflecting again the way in which neoliberalism and its discontents have blurred political categories), they were in the beginning a necessary and in many ways useful reaction to what came before. You can’t really understand the Reagan revolution, with its dismantling of unions, deregulation, and tax-slashing, without understanding FDR’s “New Deal,” and how it so dramatically expanded the power of the public sector. And so, the first section of the book tackles the 1930s to the 1970s, in which the pendulum of economic power swung towards state planning, welfare, the curbing of corporate monopolies, and stability over speculation.
The fact that a book on neoliberalism starts with Herbert Hoover, the president whose failure paved the way for Roosevelt’s success, rather than Friedrich Hayek, will throw some readers (like me). Other important works on the topic, such as Quinn Slobodian’s Globalists (2018), which Gerstle quite rightly name checks, begin with the European roots of neoliberalism in post-first world war Vienna, where economists such as Hayek and Ludwig von Mises struggled to find a way to knit a war-torn continent back together.
What they came up with as a philosophy was neoliberalism, the idea being that if capital, goods, and people could more freely move across borders, conflict would be less likely. Their ideas informed the creation of institutions such as the International Monetary Fund and the World Bank, which have since stopped working as well as they once did, in part because the world was never quite as flat as New York Times columnist Tom Friedman would have had us believe.
Capital, as always, moved faster than goods or people. Gerstle does a particularly wonderful job of connecting the political and economic dots in that post 2000s era in the US, a complicated and fascinating time in which the sort of “techno-utopianism” exemplified by Friedman’s book The World Is Flat (2005) collided with two ill-advised wars in Afghanistan and Iraq, as well as a Democratic party in thrall to both Wall Street and Silicon Valley, the election of the first black president, an economic crash, and a political narrative — we must save banks but not homeowners — that never quite added up to average voters. While it’s impossible to include every scintillating detail of the time in 300 pages (I craved even more on the existential splits between the neoliberal economic policy camp exemplified by Alan Greenspan, Bob Rubin and Larry Summers, and others like former Clinton and Obama administration advisers including Robert Reich and Joe Stiglitz, who worried about where it was all leading), Gerstle gets the broad brush strokes right. Low interest rates, financialisation, and Bush’s “ownership society” collided with increasing California wealth, identity politics, and creative accounting of stock options to brew up our very own version of 1929, which was quickly followed by the ugly race and class-dividing politics we have now.
Gerstle has a real genius for capturing political irony — how 1960s hippies turned into Bay Area libertarians, how increased access to credit hurt minorities most, how Democrat Jimmy Carter was a deregulator, how individual “freedom” to pursue prosperity might morph into terrible inequality and insecurity. But one such point he seems to have missed is the way in which Reagan, whom he sees as the “ideological architect” of the past half century of neoliberalism, supported industrial policy, something Gerstle either misses or doesn’t explore, and used state power in the form of things such as voluntary export agreements and anti-dumping duties to bolster American trade interests. Of course, protectionism and neoliberalism can marry with particularly unfortunate results such as Trump, who slashed taxes even as he started a trade war with China.
As Gerstle points out towards the end of the book, the former president may have been “pushing on an open door,” in the sense that globalisation as we’ve known it since the 1980s started shifting after 2008, when both “producers and consumers” in various countries began “to question the pursuit of a borderless world”. As The Rise and Fall of the Neoliberal Order shows us, some of this reckoning is racist and xenophobic. Some of it is a necessary swinging of the economic pendulum back to a happy medium. As we wait to see where it lands, Gerstle’s history of where we’ve been is essential reading for a post-neoliberal era.
Site oficial: Gerry Gerstle
Publicada por João Soares à(s) 10:00