The dirty truth about clean energy

Everyone knows what needs to be done to bring down CO2 levels; pump less of it into the atmosphere. But instead of reducing overall energy consumption, the focus is on increasing ‘green’ energy consumption: electric vehicles, massive electric storage installations, solar ‘farms’ and monster wind turbines. More consumption to cure the cancer of overconsumption. Ah, yes, and tree planting. Anything but serious reduction of fossil fuel consumption.
The voices calling for careful considerations of the impacts of a transition to ‘clean’ energy are drowned by the misplaced optimism of a green future. Few are asking commonsense questions that, if not answered now could easily create a worse environmental disaster later – and even compound the climate crisis. The elephant in the room few want to acknowledge is the destruction of people and the environment that will result from the hunger for so-called green energy minerals – mainly copper, cobalt, nickel and lithium.
Because of the growing demand and consequent high prices for these materials, mining companies will end up operating mega-mines in places that would otherwise be politically, environmentally, socially and/or economically unwise. These include ecologically fragile sites, biodiversity hotspots, indigenous territories, and politically unstable countries.
Some mines will deforest thousands of hectares and contaminate water resources with heavy metals. Deforestation, especially in tropical countries, will significantly reduce the Earth’s biodiversity. While the resolution adopted at the COP 26 to stop deforestation by 2030 will help somewhat, 10 more years of deforestation will bring us closer to several tipping points regarding climate, and will irremediably reduce biodiversity. Lost species cannot be brought back in 10, or 100 years’ time. Once they are extinct they are gone forever.
The biodiversity crisis, it’s worth mentioning, is considered almost as critical as the climate crisis – and the two are intimately interrelated. Climate change is leading to loss of biodiversity; meanwhile, loss of biodiversity makes ecosystems less resilient, and less able to absorb CO2… and we all know what follows.
The environmental degradation that accompanies mining will affect other key ecosystem services, such as purifying air and water, regulating stream and river flows, and reducing erosion and flooding. These and dozens more ecosystem services are critically endangered. If we act now, we can at least try to limit the most damaging of the impacts.
Then there are the human rights violations that are so closely tied to mining. Many communities, whether indigenous or campesino, will not agree to relocate willingly. Besides violating fundamental human rights, forced relocation upsets all facets of communal and personal life, identity, livelihoods and connection with the land. And, given the amount of mining for metals needed to feed the so-called “clean energy transition”, forced relocation will be part and parcel of any such transition.
Materials
According to an International Energy Agency (IEA) report, in order to “hit net-zero globally by 2050, would require six times more mineral inputs in 2040 than today” (emphasis in the original).
The minerals considered by the IEA report are copper, nickel, cobalt and lithium, as well as graphite and rare earths. They are sometimes referred to as the ‘critical minerals’. Given the power and greed of the fossil fuel barons and the relative failure of COP26, it is extremely unlikely the world will reach net zero emissions by 2050. But even a less optimistic scenario still calls for a quadrupling of mineral inputs from today’s levels. That’s one hell of an increase in a relatively short time – especially when considering the social, cultural and environmental impacts mineral extraction is having right now.
Questions to ask
Following are just some of the questions we should be asking ourselves in order to avoid deepening the environmental crisis:
Perspective
It is understandably hard to grasp the amount of land and materials that a ‘green energy’ transition will entail. Sixty-seven tons of pure copper goes into each medium-sized off-shore wind turbine. Similarly, a plug-in electric vehicle needs 2 to 4 times more copper than the standard internal combustion vehicle. The battery in that same electric vehicle uses as much lithium as 10,000 smartphone batteries. Meanwhile, energy storage installations will need to increase capacity by more than 20 times current levels. 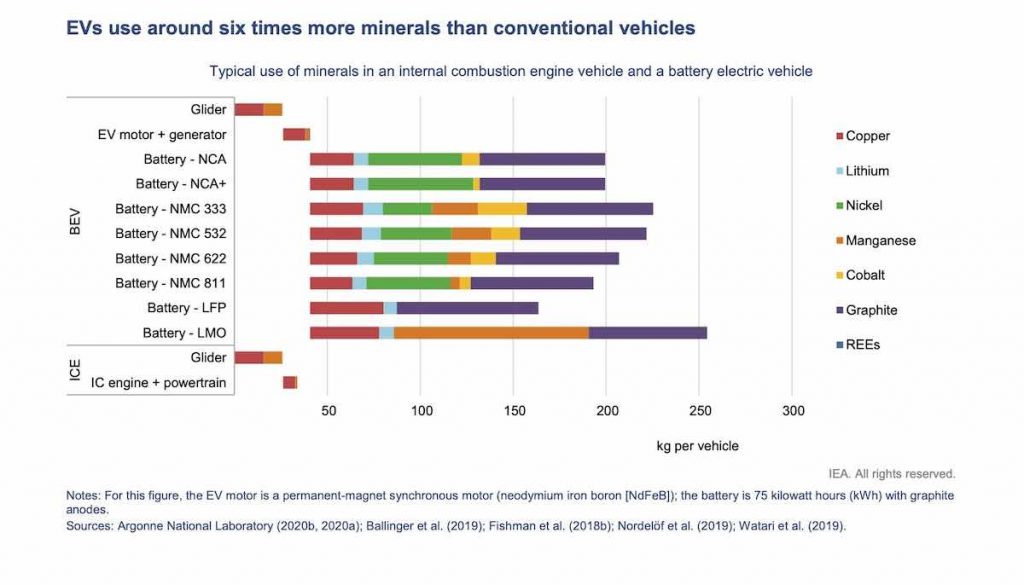 Nickel is another essential component of vehicle batteries, and its production is particularly destructive. For example the contamination generated by the Norlisk nickel mine and processing plant in Russia’s Artic region has devastated at least 350,000 hectares of forests.
Though most lithium deposits are not usually located deep underground, operations to extract it can dry up aquifers, affect communities’ access to water, and lower its quality. Lithium operations use an inordinate amount of water. In some cases, up to 500,000 gallons to produce just one ton of lithium.
Cobalt, another essential car battery component, has its own horrific dark side (see below).
In its analysis of the mineral needs for a net-zero future, the IEA did not include non-mineral materials. Balsa wood is one of these. Because of its light weight, it is highly coveted for the blades in giant wind turbines. Even though ‘balsa fever’ has only recently been an issue, it is already causing social and environmental problems in the Amazon.
A matter of scale
Most people don’t have the slightest idea of the impacts of large-scale mining. A single such mining project can easily impact thousands of hectares of land – land that can be covered in primary tropical forest harboring dozens of endangered species of animals and plants, as well as protecting key watersheds, and mitigating the effects of climate change. The same forested land could also be a major or potential tourist draw and provide drinking water to thousands. It could also be the source of food, fiber, medicines and building materials for local communities, and be held sacred by local populations.
Because of decreasing metal content found in most metal ores, which in the case of copper can be less than 0.5% (1,000 kg of ore yields 5 kg of pure copper), the environmental impacts are hard to imagine. In the case of the La Escondida copper mine in Chile’s Atacama desert, the tailings pond alone – which is used to store toxic waste from copper processing – measures 5,500 hectares (13,375 acres). The dams holding the tailings ponds are prone to collapse, and when they do they annihilate everything in their path. In 2019, for example, the collapse of the tailings dam at Samarco mining operations, owned by Brazilian company Vale, killed 270 Brazilians and devasted the river system in the vicinity of the town of Brumadinho. Four years earlier, a similar disaster killed 19 locals and wiped out the town of Bento Rodrigues, creating the worst environmental disaster in Brazil’s history. The toxic sludge reached the Atlantic Ocean, 660 kilometers away. Experts say it could take decades for the river system to recover, if at all. The mine was co-owed by BHP Billiton, the world’s largest mining corporation.
The dirty truth about clean energy metals
The low metal content in ores is accompanied by natural occurring contaminants. Heavy metals, like lead, arsenic and cadmium are almost invariably found alongside copper. Nickel ores are likewise contaminated with heavy metals.
Then there is the issue of scale. The largest open-pit operations can move almost one million tons of material (both ore and waste) per day. They do this 365 days a year. To break up the hard rock that these metals are found in, as well as to access the metals, millions of pounds of explosives are used. The Bingham Canyon copper mine in Utah, for example, uses 1,000 tons of explosives per day. And the deeper the miners have to go to access the metals, the more dire the environmental impacts.
Diesel is a key component of the most common blasting material, and the trucks that haul ore and waste can consume thousands of liters of diesel per day to transport the broken up mineralized subsoil to the surface for milling. And this is only for the extraction phase: the refining of metals like copper consume much more energy than the actual extraction. For these reasons, companies are reluctant to release their product’s real CO2 footprint, nor the amount of toxic substances dumped into the environment.
One could sum up the situation regarding mining and ‘green metals’ in one simple phrase from a 2020 United Nations Conference on Trade and Development report: “Most consumers are only aware of the ‘clean’ aspects of electric vehicles,” says Pamela Coke-Hamilton, UNCTAD’s director of international trade. “The dirty aspects of the production process are out of sight.” 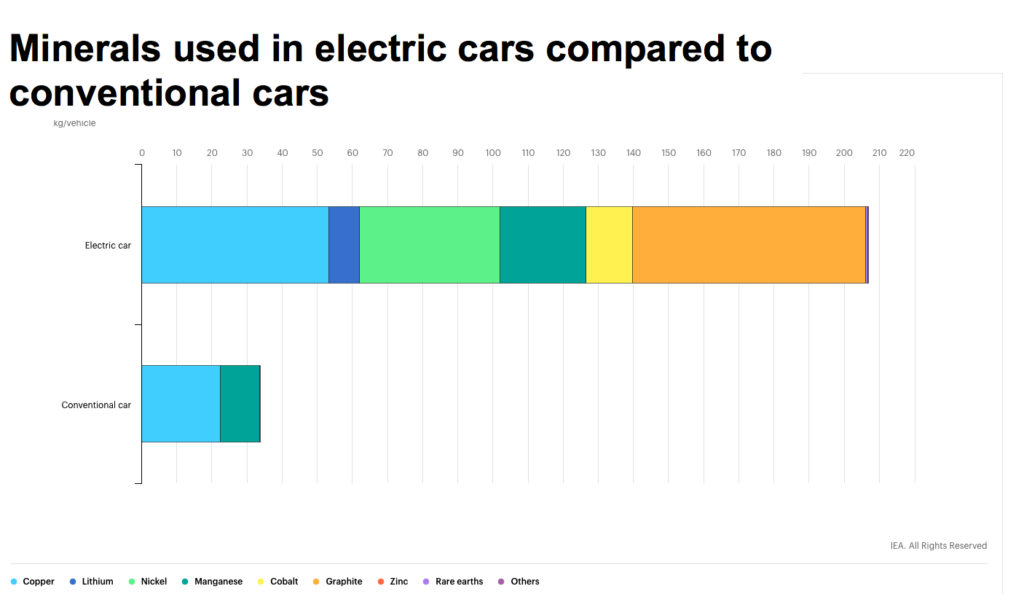