Private jets are supercharging the climate crisis. Why don’t we care?

A private jet emits as much carbon dioxide in one hour as the average person emits in one year. So why do the wealthy persist with quick flights that help devastate the environment? 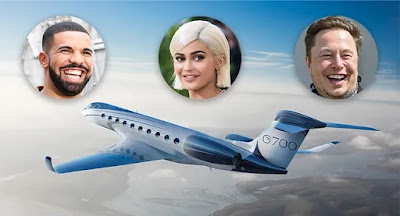 On a day when the stark decline of Australia’s environment was laid bare like scorched earth, Drake’s private jet spewed 11 tons of carbon dioxide into the air as the revered rapper flew from Barcelona to Ibiza.
How do we know this? Celebrity Jets, a Twitter account powered by a bot that shows flight paths and — crucially — flight times of private aircraft belonging to musicians, sports stars, Hollywood heavyweights and more.
The bot was written by Jack Sweeney, a 19-year-old boffin who skyrocketed from relative obscurity to notoriety when Tesla billionaire Elon Musk reportedly tried to bribe him to delete it.
Initially arguing the bot was a security issue for him, Musk went on to probe Sweeney about how it worked — according to the teen, that is — and even offered him US$5000 to bin it completely. When Sweeney countered with US$50,000, negotiations ground to a stalemate.
Now Sweeney’s bot tracks celebrities like Oprah Winfrey, Tom Cruise, Steven Spielberg and Jay-Z as they (assumedly) fly to glamorous destinations to rest and recuperate from the sheer exhaustion that being insanely rich must cause.

It might have started as just another way we can ogle the lifestyles of the rich and famous amid our intensely celebrity-focused culture, but London is on fire amid record 40-degree temperatures while Australia’s east coast has been underwater twice this year, the first being the most expensive flood ever.
More than 100 million Americans have been given extreme heat warnings today as wildfires rage in 13 states, while Iraq has choked through nine sandstorms (lasting several days each) in the past eight weeks alone.

Private jets emit two tonnes of carbon dioxide in just one hour — that’s about how much CO2 a normal person emits in one year.

And private jets are far more ubiquitous than we might realise. Europe’s leading transport campaign group Transport & Environment found one in 10 flights leaving France in 2019 were private jets — and half of those travelled fewer than 500 kilometres.
Indeed private jets are twice as likely to be used for trips under 500km in Europe compared to commercial flights, even though aviation contributes 3.5% of all global emissions.
If the aviation sector was a nation, it would be among the top 10 global emitters.
And we’re seeing the result play out in real time. Australia’s state of the environment report — kept secret for seven months by then environment minister Sussan Ley, who may well be our acting prime minister in a few years — found Australia’s environment is suffering severe deterioration.
Minister for the Environment Tanya Plibersek described the findings as “shocking” and “a story of crisis and decline” — rising greenhouse gas emissions, mostly from burning fossil fuels, are degrading ecosystems and human societies in the present tense, it found.
At least 19 ecosystems are showing signs of collapse or near collapse.
“This report should act as a wake-up call to the damage we are doing to the world around us,” Andrew King, a senior lecturer in climate science at the University of Melbourne, told Al Jazeera. “We must decarbonise our economy and society as rapidly as possible to try and limit the environmental losses that we will experience as we keep warming the world.”
But what does one do? Turn the lights off? Recycle more? Use blankets instead of heaters? Catch fewer flights? The climate-change guilt and shame such a report causes among us little fish are somewhat mollified by the fact that 100 companies are to blame for 70% of the world’s emissions, but I digress.
And make no mistake: a private aircraft and a commercial aircraft do not have the same footprint. A private jet is between 5-14 times more polluting than your average airbus per person and a whopping 50 times more polluting than trains.
What’s worse is the lengths of the trips that Celebrity Jets reveals. This week Kardashian businesswoman Kylie Jenner flew a trip that took all of 11 minutes on her private jet, but she’s been known to take three-minute journeys. That emissions are at their highest during takeoff and landing makes this even more dismal.
The Kardashians are low-hanging fruit for criticism, but it’s by no means limited to the first family of reality TV. Overnight Steven Spielberg’s jet took a 48-minute flight, the equivalent distance of Sydney to Canberra. It used 1529 litres of fuel and spat four tons of CO2 into the atmosphere.
So what do we do? Transport & Environment is calling for sweeping aviation laws that would give regulators the power to only allow the use of hydrogen or electric aircraft (powered with green hydrogen and electricity) for private jet flights under 1.000km within Europe by 2030. But time is ticking.
Despite what the likes of Matt “coal is cool” Canavan and Peta “floods are normal” Credlin are bleating about, the science is settled — rapid-onset climate change is leading to more extreme natural disasters, speedy degradation of flora and fauna, overlapping crises in food production, clean water sources, climate refugees and more.
So why do we give the rich and famous a free pass to turbocharge the planet’s widespread devastation en route to Mykonos, while we shiver through a winter so cold some homes are below the WHO’s safe temperature?
Fonte: Crickey
Publicada por João Soares à(s) 03:39