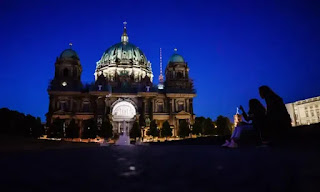 Cities in Germany are switching off spotlights on public monuments, turning off fountains, and imposing cold showers on municipal swimming pools and sports halls, as the country races to reduce its energy consumption in the face of a looming Russian gas crisis.
Hanover in north-west Germany on Wednesday became the first large city to announce energy-saving measures, including turning off hot water in the showers and bathrooms of city-run buildings and leisure centres.
Municipal buildings in the Lower Saxony state capital will only be heated from 1 October to 31 March, at no more than 20C (68F) room temperature, and ban the use of mobile air conditioning units and fan heaters. Nurseries, schools, care homes and hospitals are to be exempt from the saving measures.
“The situation is unpredictable,” said the city’s mayaor, Belit Onay, of the Green party. “Every kilowatt hour counts, and protecting critical infrastructure has to be a priority.”
Hanover’s 15% savings target is in line with the reductions the European Commission this week urged member states to make to ensure they can cope in the event of a total gas cutoff from Russia. Germany, which is more reliant on Russian gas imports than other European countries, is under pressure to lead the way.
In Berlin, the German capital, about 200 historic monuments and municipal buildings were shrouded in darkness on Wednesday night as the city switched off spotlights to save electricity. Monuments previously lit up at night include the Victory Column in Tiergarten park, the Memorial Church on Breitscheidplatz and the Jewish Museum.
“In the face of the war against Ukraine and Russia’s energy threats it is vital that we handle our energy as carefully as possible,” said Berlin’s senator for the environment, Bettina Jarasch.
Germany uses most of its gas imports to heat homes and power its large industry. But while an energy emergency plan initiated in June enables utility firms to pass on high gas prices to customers, most private households in Germany pay their gas bills in set advance payments and have yet to directly experience the kind of dramatic increases that would change consumer behaviour.
On Thursday, Germany’s government confirmed that a planned gas surcharge on customers could be much higher than previously expected, to save energy companies from going bankrupt in the coming months.
“We can’t say yet how much gas will cost in November, but the bitter news is it’s definitely a few hundred euros per household,” said the economy minister, Robert Habeck.
Germany also uses gas to generate about 15% of its electricity needs, which is where municipal authorities have decided to make relatively painless savings.
The city of Munich, in Germany’s south, this week announced it would switch off spotlights on its town hall on Marienplatz square, which is usually lit up until 11pm, and have only cold water at municipal offices. Fountains would also be turned off at night.
Nuremberg is closing three of its four city-run indoor swimming pools and will keep its outdoor lidos open until 25 September.
In April, Berlin had announced measures to keep its outdoor swimming pools at two degrees below the weather-dependent standard temperature throughout the summer season.
Publicada por João Soares à(s) 20:55