The uncomfortable truth about the EU Forest Strategy’s opponents 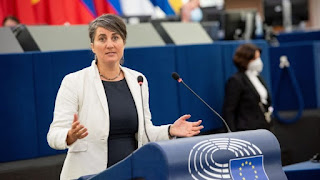 The outcry against Europe’s new forest strategy is baffling, signalling that EU countries and the private sector, as well as a faction of European Parliament lawmakers are in denial about the serious problems face by Europe’s forests, argue Anna Deparnay-Grunenberg and Michal Wiezik.
Michal Wiezik is a Slovakian member of the European Parliament with the European People’s Party group and Anna Deparnay-Grunenberg is a Green MEP from Germany.
The European Court of Auditors sounded the alarm on Europe’s forests this month. They found that Europe’s most precious forests – supposedly earmarked for special protection under the Habitats Directive, and which represent 23% of all EU forests – are mainly in either a “bad or poor condition.”
Perhaps just as disturbingly, the report also reveals that the exact state of the remaining 77% of unprotected forests, is unknown. This is because there is no harmonised and comparable data across the EU, even for some of the most basic forest-related information.
The report nevertheless depicts a worrying situation. For example, European forests’ capacity to store carbon has declined by 28% from 2013 to 2018. Another recent study found that tree loss has increased on about 19% of tree plots across Europe.
It’s impossible to devise a solution without a clear picture of the problem. The European Commission rightly identified the gaps, and in its Forest Strategy, released in July, it proposed a new law for Forest Observation, Reporting and Data Collection, to improve the accuracy of forest monitoring.
Who is fuelling Euroscepticism?
Since then, the Commission has faced a huge pushback from several EU Member States, the forestry sector and its allied MEPs, who are resisting efforts to open their data to wider scrutiny.
Their hostility to transparency on such a critical issue can be seen in their accusations that the Commission is seeking a “power creep” or even of fuelling Euroscepticism.
On the contrary, what triggers Euroscepticism is false claims that the EU is taking control over a policy area over which it lacks competence.
This message, being pedalled by critics of the Forest Strategy is misguided and unfortunately does not just come from the ranks of the extreme right, but also from centre-right and liberal parties. It is even reinforced by some politicians who champion the rule of law.
Prudent and rational use of natural resources, nature protection, climate change mitigation and adaptation are all areas on which the Commission and the Member States share competence and on which there is a desperate need to deliver.
Forests are crucial to achieving our climate mitigation and adaptation and biodiversity protection goals: when healthy, they store carbon dioxide (CO2), they clean our waters, they protect us from floods, and they harbour incredible biodiversity. Moreover, they are beautiful and provide us with services favouring human physical and even mental health.
Monitoring forests and their life support systems in a coordinated, timely, frequent and transparent way is vital if we are to achieve the above.
A European problem that needs a European solution
The outcry against the proposed initiative is truly baffling: it signals that member states and the private sector are in denial about a grave problem – a problem the EU needs to solve.
The European Court of Auditors argues that the “main reason” for the decline in forests’ health is “the increase in wood harvesting rates”. This increase is due to the exploding demand for wood in the past decade – mainly for bioenergy.
By considering burning trees for bioenergy as climate neutral and subsidising it to meet its renewable energy targets, the EU has created a huge demand for wood. This leads to unfair competition as other users of biomass cannot afford to compete with the subsidies the bioenergy industry receives.
The unfair competition poses threats not only to the established and higher added value wood-based industry but also to forests, and especially those forests which have retained their natural structure, dynamics and biodiversity, such as the vast areas of primary forest still to be found in the Carpathians or Scandinavia.
We are convinced that forests’ role is to satisfy balanced demands for wood and provide a vibrant environment for nature and society. We will fail to avert the climate breakdown and biodiversity loss if we fail to secure the health of natural forests.
We are equally convinced that it is possible to have a constructive debate between promoters of the forestry sector and those demanding protection of these precious ecosystems. One thing is for sure, there is no real economic or ecological benefit in continuing the status quo of increasing demand for wood.
That is because the status quo was based on falsehoods and a disregard for the environmental pillar of sustainable development.
There is no way to fully integrate biodiversity considerations into forests only managed for wood production. For the most iconic primary forests, biodiversity must be prioritised as wood production inevitably reduces the habitat of many species.
It is important that we establish a dialogue and from our side the terms of such debate are simple: it has to be factual, it has to include the environmental pillar, and it needs to face the uncomfortable truth that in its current form, mainstream forestry drives forest degradation, and exacerbates the biodiversity and climate crises.
This is not intentional harm, but a whole system of forestry in which we believed that ecosystems could not be depleted.
We now know that alternatives are possible, and we should pursue them together
Publicada por João Soares à(s) 10:00