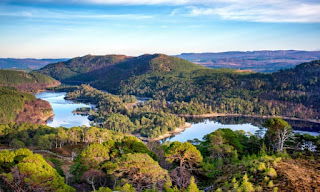 A large swathe of the Scottish Highlands stretching between the west coast and Loch Ness is to be rewilded as part of a 30-year project to restore nature.
The Affric Highlands initiative aims to increase connected habitats and species diversity over an area of 200,000 hectares (500,000 acres), incorporating Kintail mountain range, and glens Cannich, Moriston and Shiel. Plans include planting trees, enhancing river corridors, restoring peat bogs and creating nature-friendly farming practices.
The project has been launched after two years of conversations and meetings between local communities and conservationists from rewilding charity Trees for Life. Similar to the WildEast project in East Anglia, it is a community-led effort to restore nature over a large area, which organisers hope will be a catalyst for social and economic regeneration.
“This was once a much more peopled landscape that was rich with wildlife and we think we can find new ways to establish that connection again, today,” said Alan McDonnell, a conservation manager at Trees for Life, and the project leader. “The idea of doing it at scale is that you get a much bigger natural response because you’ve got room for change and dynamism in that landscape.”
The Affric Highlands initiative is located west of the Cairngorms Connect project, which is one of the UK’s largest land restoration projects at 60,000 hectares. In terms of total area, it is three times the size of Cairngorms Connect but at present only a quarter of the Affric Highlands area is managed by people who have signed up, including farmers, landowners and fishers. McDonnell hopes more will get involved once the project has launched.
One of the challenges has been bringing together people reliant on traditional land management practices to work on large-scale landscape restoration. McDonnell has had meetings with around 50 local stakeholders and has been working with a psychologist to help him communicate with people who might feel sceptical, and to allay the fears of damage to livelihoods that have accompanied other rewilding projects in the UK.
“Rewilding is a word that people define differently. For some people, it’s wolves and bears. For Trees for Life, it’s about the land, and what it can support,” he said. “We’re primarily motivated by the nature that will come with that, but that’s not to say that we don’t value everything that comes with it, so whether it’s opportunities for businesses and job creation, or natural capital and the ability to monetise that, there are a lot of ways we can use land better and increase what it can offer.”
Native wildlife set to benefit includes a range of river species such as salmon, trout, ospreys and otters, as well as montane species such as golden eagles, red grouse, short-eared owls and mountain hares.
The mountain hare (Lepus timidus) is one of the species set to benefit from the rewilding project. Photograph: Mark Hamblin
Rewilding Europe helped fund the work with a £30,000 grant and it will be the organisation’s first UK project, one of nine across the continent. Other projects include Romania’s southern Carpathians, Croatia’s Velebit mountains, Italy’s central Apennines and Bulgaria’s Rhodope mountains.
A £200,000 grant from the Esmée Fairbairn Foundation will help fund a two-year development period, during which time McDonnell will be recruiting three people to work on the project full-time. Practical work on the ground is set to begin in 2023.
Trees for Life has already established 2 million trees as part of the restoration of the Caledonian Forest. In 2022, the charity expects to open its rewilding centre on the 4,000-hectare (10,000-acre) Dundreggan estate. The centre will have 40-bed accommodation, events spaces, classrooms and a cafe.
McDonnell said: “In 10 years’ time I would hope to see some significant changes happening … in particular I would love there to be more riverbank woodlands, which would increase insect life, help fish species and support richer river ecosystems. That might mean fencing off part of a landowner’s riverbank, planting trees, or allowing natural regeneration.”
The project also aims to help individuals get funding from government and other sources for green initiatives on their land, so people who sign up to it can financially benefit.
Frans Schepers, managing director of Rewilding Europe, said: “Our decision to accept the project as our ninth rewilding area reflects the hard work and achievements of Trees for Life, its volunteers and its partners. Including Affric Highlands in our portfolio of major European rewilding areas will help magnify rewilding’s impact in the Highlands, and put it firmly on the global map.”
Publicada por João Soares à(s) 18:30