Solar vs. Nuclear: Which Is the Best Carbon-Free Energy Source? 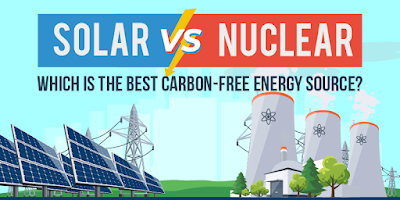 As the global climate crisis continues to rise unabated, the world slowly realizes that our use of non-renewable energy sources, such as natural gas and coal, plays a significant role in the worsening problem. Countries are now scrambling to build infrastructure for alternative renewable energy sources as they try to become part of the solution.
The solar vs. nuclear energy debate is one of the hotly contested topics for proponents of renewable energy. Both energy sources are considered clean and carbon-free; their infrastructure can also be built at scale to power a large area.
Many first-world countries use nuclear energy to power cities, and solar is not far behind. But, which one is the better energy source? The infographic below will give you a comparative analysis of the two.