Prosecutors in Mexico seeking arrest warrants for more than 30 scientists 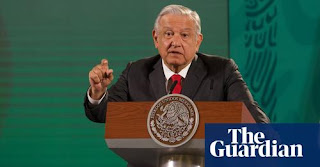 Mexico’s scientific community has reacted with outrage after the country’s chief prosecutor requested arrest warrants for 31 scientists, researchers and academics on accusations of organised crime, money laundering and embezzlement – charges that could land them alongside drug cartel kingpins in one of the country’s most notorious lockups.
A judge at the maximum security Altiplano prison – from which Joaquín “El Chapo” Guzmán escaped in 2015 – denied granting the arrest warrants on Wednesday. But the federal prosecutor immediately announced plans to pursue arrest warrants for the third time.
The university professors have been accused of violating a law that prevents members of an advisory board from receiving money from a government science fund. But that law was passed in 2019, and the scientists got the $2.5m years earlier when it was apparently legal. Those involved have denied the funds were illegal or misused.
The National Council on Science and Technology (Conacyt) has described the reaction to the arrest warrant applications as “a concerted wave of disinformation,”, which was spreading “terror” in the scientific community.
“They’re talking about funds from illicit origins, and they’re calling it organised crime when it was a [non-profit] organisation,” said Alma Maldonado, investigator with the public research centre Cinvestav. “It’s completely absurd to take it to this level of accusation.”
But scientists and academics describe the prosecutions as an attempt at silencing them as the administration of President Andrés Manuel López Obrador imposes punishing austerity policies and pays short shrift to science in his response to the pandemic.
“The message from Conacyt and the prosecutor to the national academic community is strong and clear: if you think differently than us, it’s best you find something else to do,” wrote political economist Javier Aparicio in the newspaper Excélsior.
The criminal accusations have deepened the acrimony between López Obrador administration and the scientific community. AMLO, as the president is known, liquidated public trusts for funding academic and scientific research, alleging corruption and claiming the money would pay for pandemic relief.
Elena Álvarez-Buylla, the Conacyt director, often attacks “neoliberal science”, and said in 2020 it “produced the most splashy, and perhaps most useless advances, like reaching the moon”.
The attempt to criminally charge academics with organised crime offences raised questions in Mexico of prosecutorial priorities – at a time when the president, who often criticises journalists and scientists, promotes a policy of “hugs not bullets” and seldom has a cross word for drug cartel bosses.
The Associated Press contributed to this story
Publicada por João Soares à(s) 20:28