Research suggests that by targeting enhanced aid money more effectively and with greater innovation, a solution is possible. 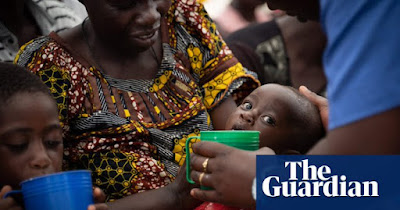 Ending hunger by 2030 would come with a price tag of $330bn (£253bn), according to a study backed by the German government.
Research groups compiled data from 23 countries and found international donors would need to add another $14bn a year to their spending on food security and nutrition over the next 10 years; more than twice their current contribution. Low and middle-income countries would also have to give another $19bn a year, potentially through taxation.
The study, published this week, coincided with warnings that the world has an “immense mountain” to climb in order to end hunger, with 11 countries showing “alarming” levels of hunger, and “serious” levels in another 40, according to the Global Hunger Index.
“We’re trying to solve a problem here – that is, hunger being on the rise – and still almost 700 million people are going to bed hungry at night. Whatever we’re currently spending is not helping those people,” said Carin Smaller, co-director of Ceres2030, a coalition funded by the German government and the Bill and Melinda Gates Foundation.
Smaller said researchers used an economic model that took existing spending and looked at how it could be improved in 14 areas, ranging from social protection and income support, to investment in research and training.
“It’s not about doubling spending to do the same things,” she said.
The research, from the Centre for Development Research, Cornell University, the UN Food and Agricultural Organization (FAO), the International Food Policy Research Institute, and the International Institute for Sustainable Development, found that advancements in technology needed to be matched by support for farmers, especially women, who were often not able to benefit from new techniques or crops that could make harvests more reliable.
It also suggested that work on reducing losses from harvests should be expanded beyond the existing focus on storage, to include more nutritious fruits and vegetables.
The study included the development of an AI tool that analysed half a million research articles from the past 20 years to find evidence on what works to end hunger.
“If rich countries double their aid commitments and help poor countries to prioritise, properly target and scale up cost effective interventions on agricultural R&D, technology, innovation, education, social protection and on trade facilitation, we can end hunger by 2030,” said Maximo Torero, chief economist at the FAO.
Publicada por João Soares à(s) 06:58