The Neoliberal Looting of America

Não foi só a América que foi saqueada pelo neoliberalismo: o artigo pode ser generalizado a quase todo o mundo desenvolvido. Poucos ideólogos terão feito tanto mal ao mundo como Hayek.
“It’s hard to separate what’s good for the United States and what’s good for Bank of America,” said its former chief executive, Ken Lewis, in 2009. That was hardly true at the time, but the current crisis has revealed that the health of the finance industry and stock market are completely disconnected from the actual financial health of the American people. As inequality, unemployment and evictions climb, the Dow Jones surges right alongside them — one line compounding suffering, the other compounding returns for investors.
One reason is that an ideological coup quietly transformed our society over the last 50 years, raising the fortunes of the financial economy — and its agents like private equity firms — at the expense of the real economy experienced by most Americans.
The roots of this intellectual takeover can be traced to a backlash against socialism in Cold War Europe. Austrian School economist Friedrich A. Hayek was perhaps the most influential leader of that movement, decrying governments who chased “the mirage of social justice.” Only free markets can allocate resources fairly and reward individuals based on what they deserve, reasoned Hayek. The ideology — known as neoliberalism — was especially potent because it disguised itself as a neutral statement of economics rather than just another theory. Only unfettered markets, the theory argued, could ensure justice and freedom because only the profit motive could dispassionately pick winners and losers based on their contribution to the economy.
Neoliberalism leapt from economics departments into American politics in the 1960s, where it fused with conservative anti-communist ideas and then quickly spread throughout universities, law schools, legislatures and courts. By the 1980s, neoliberalism was triumphant in policy, leading to tax cuts, deregulation and privatization of public functions including schools, pensions and infrastructure. The governing logic held that corporations could do just about everything better than the government could. The result, as President Ronald Reagan said, was to unleash “the magic of the marketplace.”
The magic of the market did in fact turn everything into gold — for wealthy investors. Neoliberalism led to deregulation in every sector, a winner-take-all, debt-fueled market and a growing cultural acceptance of purely profit-driven corporate managers. These conditions were a perfect breeding ground for the private equity industry, then known as “leveraged buyout” firms. Such firms took advantage of the new market for high-yield debt (better known as junk bonds) to buy and break up American conglomerates, capturing unprecedented wealth in fewer hands. The private equity industry embodies the neoliberal movement’s values, while exposing its inherent logic.
Private equity firms use money provided by institutional investors like pension funds and university endowments to take over and restructure companies or industries. Private equity touches practically every sector, from housing to health care to retail. In pursuit of maximum returns, such firms have squeezed businesses for every last drop of profit, cutting jobs, pensions and salaries where possible. The debt-laden buyouts privatize gains when they work, and socialize losses when they don’t, driving previously healthy firms to bankruptcy and leaving many others permanently hobbled. The list of private equity’s victims has grown even longer in the past year, adding J.Crew, Toys ‘R’ Us, Hertz and more.
In the last decade, private equity management has led to approximately 1.3 million job losses due to retail bankruptcies and liquidation. Beyond the companies directly controlled by private equity, the threat of being the next takeover target has most likely led other companies to pre-emptively cut wages and jobs to avoid being the weakest prey. Amid the outbreak of street protests in June, a satirical headline in The Onion put it best: “Protesters Criticized For Looting Businesses Without Forming Private Equity Firm First.” Yet the private equity takeover is not technically looting because it has been made perfectly legal, and even encouraged, by policymakers.
According to industry experts, 2019 was one of the most successful years for private equity to date, with $919 billion in funds raised. The private equity executives themselves can also garner tremendous riches. Their standard fee structure involves collecting around 2 percent of the investor money they manage annually, and then 20 percent of any profits above an agreed-upon level. This lucrative arrangement also lets them tap into the very favorable “carried interest” tax loophole, allowing them to pay much lower capital gains tax rates on their earnings, rather than normal income taxes like most people.
An examination of the recent history of private equity disproves the neoliberal myth that profit incentives produce the best outcomes for society. The passage of time has debunked another such myth: that deregulating industries would generate more vibrant competition and benefit consumers. Unregulated market competition actually led to market consolidation instead. Would-be monopolies squeezed competitors, accrued political power, lobbied for even more deregulation and ultimately drove out any rivals, leading inexorably to entrenched political power. Instead of a thriving market of small-firm competition, free market ideology led to a few big winners dominating the rest. 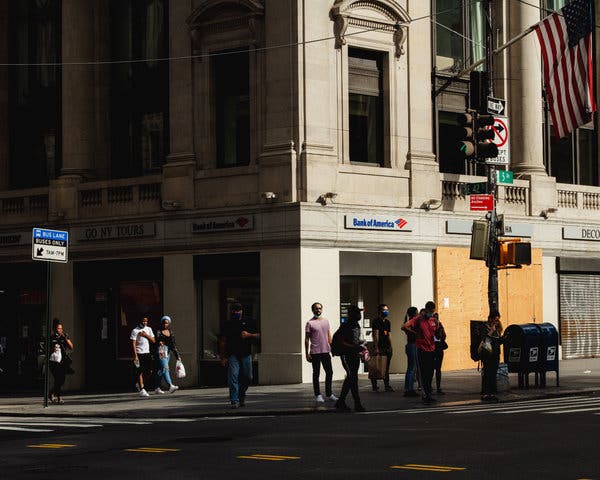 The current crisis has revealed that the health of the finance industry and stock market are disconnected from the actual financial health of the American people.
Credit...George Etheredge for The New York Times
Take the banking sector. For most of American history, banks were considered a public privilege with duties to promote the “best interest of the community.” If a bank wanted to merge or grow or offer new services, the regulators often denied the request either because a community could lose a bank branch or because the new product was too risky. During the neoliberal revolution of the 1980s and ’90s, Congress and bank regulators loosened the rules, allowing a handful of megabanks to swallow up thousands of small banks.
Today, five banks control nearly half of all bank assets. Fees paid by low-income Americans have increased, services have been curtailed and many low-income communities have lost their only bank. When federally subsidized banks left low-income communities, vulture-like fringe lenders — payday, title, tax-refund lenders — filled the void. As it turns out, private equity firms are invested in some of the largest payday lenders in the country.
Faith in market magic was so entrenched that even the 2008 financial crisis did not fully expose the myth: We witnessed the federal government pick up all the risks that markets could not manage and Congress and the Federal Reserve save the banking sector ostensibly on behalf of the people. Neoliberal deregulation was premised on the theory that the invisible hand of the market would discipline risky banks without the need for government oversight. Even a former Fed chairman, Alan Greenspan, the most committed free market fundamentalist of the era, admitted in the understatement of the century, that “I made a mistake.”
We can start fixing the big flaws propagated over the last half century by taxing the largest fortunes, breaking up large banks and imposing market rules that prohibit the predatory behaviors of private equity firms.
Public markets can take over the places that private markets have failed to adequately serve. Federal or state agencies can provide essential services like banking, health care, internet access, transportation and housing at cost through a public option. Historically, road maintenance, mail delivery, police and other services are not left to the market, but provided directly by the government. Private markets can still compete, but basic services are guaranteed to everyone.
And we can move beyond the myths of neoliberalism that have led us here. We can have competitive and prosperous markets, but our focus should be on ensuring human dignity, thriving families and healthy communities. When those are in conflict, we should choose flourishing communities over profits.
Mehrsa Baradaran (@MehrsaBaradaran) is a professor of law at the University of California, Irvine, and author of “The Color of Money: Black Banks and the Racial Wealth Gap.”
Publicada por João Soares à(s) 20:42

Enviar a mensagem por emailBlogThis!Partilhar no TwitterPartilhar no FacebookPartilhar no Pinterest
Etiquetas: As minhas leituras, English